Somalia - The fall of siad barre and descent into civil war

By the mid-1980s, both the Somali and Ethiopian governments were faced with growing internal conflicts, and in 1988 they signed an agreement to respect one another's borders. By the late 1980s, Siad Barre's hold on power was becoming increasingly tenuous. The Somali National Movement (SNM) began operating in the northern region in 1988. The Siad Barre government reacted with brutal force, but was not able to destroy the SNM. Beginning in 1989, the central government was also faced with insurrection in the south, particularly by the Somali Patriot Movement (SPM). By the early 1990s, additional insurgent groups organized along regional and clan lines were formed. These included United Somalia Congress (USC), the Somali Democratic Front (SDF), and the Somali Salvation Democratic Front (SSDF). Widespread conflict disrupted food production and distribution. By the late 1980s, hundreds of thousands were at risk for malnutrition and starvation. By late 1990, Siad Barre's government found itself in control of little other than Mogadishu and the surrounding environs. He was forced to flee the capital in January 1991.

Following Siad Barre's exodus, the USC seized Mogadishu. Though its leadership stated they had no plans to form a permanent government, the other factions showed little trust. Factions that had previously focused their efforts on unseating Siad Barre now threatened to turn upon one another—despite the efforts of "reconciliation" conferences sponsored by Djibouti and numerous calls for dialogue. The USC itself split into two antagonistic factions led by Muhammad Fara Aidid and Ali Mahdi. Mahdi later formed the Somali Salvation Alliance (SSA) and declared himself "president of Somalia." In the north, the SNM declared the independence of their sphere of influence as "Somaliland"— roughly re-creating the borders of the old British protectorate. Leaders of the Isaaq clan then "elected" Mohammad Ibrahim Egal, who had been prime minister of Somalia in the 1960s, as "president of Somaliland." Siad Barre and his supporters regrouped at Guerbaharre and reorganized under the name as the Somali National Front (SNF). In September 1991, open combat broke out among the various groups and continued for nearly six months. 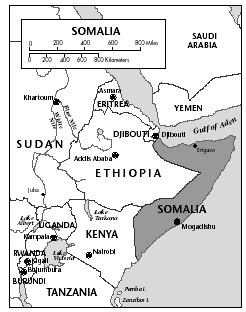 thank you so much for this very helpful; never knew about this until now
2
Telford

Thanks for this information, atleast now I know where the Somali problem begun