Alvaro de Mendana, a Spanish explorer, was the first European to see the Solomon Islands in 1568. The Spanish named the archipelago, which they mistakenly believed to be a continent, after King Solomon, hoping that riches like that credited to him in the Bible would be found there. At that time, Westerners had yet to discover a method of reckoning longitude so the Solomons were "lost" on European maps for almost 200 years. The English and French explorers of the late 1700s were finally able to chart the islands for other seafarers. Early contacts between European sailors and Islanders were often marked by violence and mistrust, but the former's need for fresh water and other supplies and the latter's desire for iron tools and weapons promoted trade that increased through the 1800s. Early in that century, exchanges with whaling ships were important, followed later by trade for tortoise shell and other tropical products. Beginning in 1870, Islanders were recruited to work on plantations in Australia, Samoa, and Fiji. Some of their descendants are found in those nations today. Trade also put firearms in the hands of the Islanders, adding a new element to conflict among different local groups. Diseases introduced by Europeans took their toll, and were further spread as Islanders began to travel more widely within the archipelago.

In the late 1800s Great Britain began to be concerned about the unregulated activities of outsiders in the South Pacific. These included labor recruiting that more closely resembled kidnapping and trading by beachcombers who were little more than criminals on the run from their home countries. The Western Pacific High Commission was established in Fiji in 1877 to protect British interests and those of British subjects living in the Solomons. France and especially Germany began colonial expansion into the Pacific during this period. Rivalry between Britain and Germany created a series of confrontations and ultimately treaty negotiations. The Solomons constituted one of the disputed areas in this process. Finally, the islands were divided between the two nations. Bougainville, the northernmost of the chain, became part of German New Guinea, ultimately to become a reluctant province of independent Papua New Guinea. The rest of the Solomons became a British Protectorate (BSIP) in 1893.

The Protectorate was a tiny part of the vast British Empire, regarded as having little economic potential. Administration concentrated on pacifying the more violent local groups and, to a lesser extent, easing the way for foreign commercial interests to develop a plantation economy with copra (dried coconut meat) as the major export. Christian missions provided most of the health and education services for Islanders, while administrators tried to prevent mission rivalry by keeping the different sects in separate parts of the Protectorate. One result was differing rates of social development among the various islands; for example, the aggressive Methodist mission created a noteworthy level of practical education in what is now the Western Province. Generally, however, the pace of change was slow until the Second World War.

The Japanese invasion of the Solomons in 1942 and Allied counterattacks brought great devastation. Military action on Guadalcanal was particularly fierce. Allied troops with vast amounts of European goods were a new stimulus to change among the local population. According to postwar British administrators, one consequence was the appearance of various social movements seeking to overturn the colonial status quo. The most famous of these was "Marching Rule" on Malaita, described on one hand as a "cargo cult" and on the other as the beginnings of Solomon Island nationalism.

Decolonization of the Pacific Islands began in the 1960s, but the Protectorate remained in place until independence was granted in July 1978. The new Constitution established a modified Westminister system of government with the British monarch as head of state. A Solomon Islands citizen is appointed, on the recommendation of the National Parliament, as governor general to represent the monarch, but has limited powers. Effective executive power is exercised by the prime minister and his cabinet. The prime minister is elected by and from the members of Parliament, and appoints ministers for parliamentary membership. Parliamentary elections occur every four years but without the support of a majority of members, the prime minister can be forced to step down between elections. Parliament can also dissolve itself before its four-year term is over by an absolute majority vote. In that case, a general election must be held within four months.

The geographic and linguistic fragmentation of the islands creates particular strains within the political system, including pressures to decentralize government functions. Parliamentary constituencies have increased in number since independence. There are presently 50 members—47 from electorates in the 10 provinces, and three from the Honiara Town Council area. Provincial governments have been established, each with an assembly, a premier, and a staff. This adds to the cost of government.

Although political parties are basic to a British parliamentary system, those in the Solomon Islands have been loose factions. There are frequent defections from one party to another, creating long periods of political instability. In 1997, 22 parliamentary incumbents failed in their bid for reelection. A coalition government was formed under the broad heading of the Solomon Islands Alliance for Change, and headed by the new prime minister, Bartholomew Ulufa'alu. 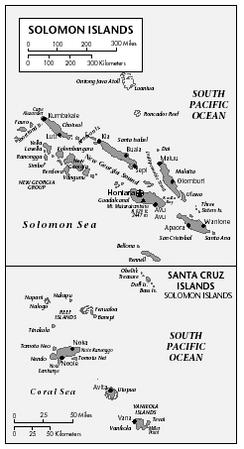 In late 1998, political conditions in the country deteriorated badly and armed ethnic factions began fighting what amounted to a civil war. The first group to arm itself was the Isatabu (Islanders' name for Guadalcanal) Freedom Movement, which sought to displace the ethnic Malaitans from the big island. In 1999, they began a campaign of ethnic cleansing, displacing thousands of Malaitans and killing, by many estimates, several dozen non-combatants. (The Malaitans were non-native to the major island of Guadalcanal, but held considerable economic and political power.) Ulufa'alu declared a state of emergency in February 1999 and entered into a series of negotiations with the militia, none of which yielded an end to the unrest.

In 2000, the Malaitans formed their own paramilitary force, the Malaita Eagles Force. In May, they kidnapped the prime minister and held him for two days at gun point, demanding the government do something to resist the Isatabu militia. Since the Solomons had no military, there was little that could be done. New Zealand and Australia sent military craft to evacuate their nationals as the country descended into political chaos, and the Commonwealth sent a delegation to try and re-establish peace. The MEF ousted the government in June. Ulufa'alu was forced to resign and an interim government was established, headed by Monassah Sogavare on 30 June 2000. A peace accord, called the Townsville Peace Agreement, was signed in October 2000, calling for an end to hostilities, a surrendering of arms, and new elections in December 2001, which were won by the People's Alliance Party (PAP), headed by Allan Kemakeza.

The historical background of the solomon island has a very important emphasis on it as it state clearly the history of the country until her independence. but the focus has mainly from from the founding of our island by a spanish explorer up to our independence, political system and ethnic issues arise in 1998-2000. By contributing to ths background of the country,from 2001 till 2007 , the country has experienced difficulties in political, economical and development compared to the past years. this has resulted from the ethnic tension between the Guadalcanal and Malaitan militants. With those problems occuring the country ,there aer several issues which are really attacking the system of government in the present times, such problems include , unstable government in the country, Motion of no confidence, issues of the Attorney general Mr.Moti etc. these are what has going on in the country as we compared to the past experienced that there has been a great difference according to the progress of our country.therfore there should be a complete turn and learn from our past experience so that we learn from our mistakes and take another round for the betterment of our country.