During the past several centuries, the lands of the Czech Crown were ruled from Vienna, while Slovakia fell under the Hungarian domain. The Czechs enjoyed a relatively high degree of cultural autonomy from Vienna. The Slovaks, however, were subjected to the policies of Magyarization—becoming Hungarian through forced linguistic assimilation. Consequently, the Czechs were better prepared for independent statehood when the Czech lands and Slovakia were joined in the common state of Czechoslovakia in 1918. As a result, the republic was ruled and administered, to a great extent, from Prague. More than one million Czech professionals moved to Slovakia and played a key role in the urbanization and industrialization of the republic, and in the development of its educational system.

The governance of the interwar Czechoslovak Republic was derived from the doctrine of "Czechoslovakism," meaning that the Czechs and Slovaks comprise one nation that speaks two similar languages. The main purpose of the doctrine was to minimize the influence of large German and Hungarian minorities that remained in Czechoslovakia after the partition of the Austro-Hungarian monarchy. Although the Czechoslovak state became one of the most stable and prosperous democracies in Central Europe, it was dismembered by Nazi Germany in 1938. The Czech lands and Moravia fell under German control and formed a so-called Protektorat, while Slovakia was turned into Hitler's puppet state under the leadership of Jozef Tiso. Both the Slovak State and the Protektorat lasted until the end of World War II. In 1945, Czechoslovakia was reunified.

The Czechoslovak Communist Party staged a coup in 1948, and Czechoslovakia became one of the satellites of the Soviet Empire. The 1949 Constitution proclaimed that Czechoslovakia is a unitary state comprised of two equal nations, Czechs and Slovaks. In 1968, Alexander Dubcek, a Communist Party leader, initiated the democratic reform movement known as "Prague Spring." His attempt to build "socialism with a human face" was crushed, however, by an invasion of the Soviet-led armies of the Warsaw Pact in August 1968. An amendment to the Constitution gave Slovakia a nominal degree of autonomy, including its own government and legislature, making Czechoslovakia a federation of two republics. In practice, however, the federation was ruled from Prague, and the federal arrangements were unnoticed in the repressive aftermath of the "Prague Spring," the so-called "period of normalization."

After 20 years of "normalization," the hardline Communist regime of Czechoslovakia crumbled in only 10 days, as the 1989 "Velvet Revolution" led to a peaceful transfer of power. In December 1989, a former dissident playwright, Vaclav Havel, became the president of Czechoslovakia. Free elections were held in Czechoslovakia on 8 June 1990, and new political parties, the Civic Forum (CF) and its Slovak counterpart, the Public Against Violence (PAV), won. Yet, in Slovakia the PAV faced a strong challenge from Jan Carnogursky's Christian Democratic Movement (ChDM). The transitional process soon ran into interrepublic disagreements over the structure of the federation, competencies of republican governments, and the pace and strategy of economic reforms.

By 1991, strong political parties emerged in both republics, each with its own national agenda. Vaclav Klaus and his Civic Democratic Party (CDP) represented the interests of the Czech Republic. In Slovakia, the Movement for a Democratic Slovakia (MDS) was led by Vladimir Meciar. Both parties won electoral victories in their respective republics in the June 1992 elections. Despite public opinion polls that favored the continuation of a unified Czechoslovakia, the party leaders swiftly agreed on the dissolution of the federation. The peaceful dissolution, or the "Velvet Divorce," was preceded by more than 60 agreements, signed 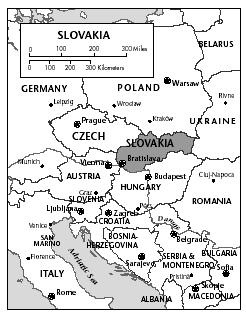 by political representatives of the Czechs and Slovaks. In December 1992, the Federal Assembly voted to dissolve the union and itself. Slovakia became a sovereign, independent state on 1 January 1993.

In Slovakia, Meciar and the MDS were plagued by internal fragmentation and by the absence of a stable parliamentary majority. Meciar's authoritarian and confrontational style quickly alienated many of his former supporters. Several party leaders deserted the governing MDS and formed smaller splinter-parties. These splinter-groups, the opposition (comprised mainly of the ChDM and the Party of the Democratic Left-PDL), and ethnic Hungarian parties gained strength as more deputies left the MDS. Finally, in March 1994, the opposition managed to pass a no-confidence vote with the help of President Michal Kovac. Following Meciar's resignation, the government of Jozef Moravcik retained power for only six months.

Meciar's MDS bounced back in the September–October 1994 elections, winning 35% of the vote. The MDS formed a coalition government that remained in power until the September 1998 elections. During his four-year term, Meciar attempted to consolidate the political power of the MDS. His new governing coalition excluded all opposition forces from the political process and reversed some policies of the Moravcik government. Privatization of state-owned property became an instrument for rewarding political loyalty. Election laws were changed in a way that favored the MDS, and Meciar was accused of manipulation and gerrymandering. Much legislation introduced by his government was found to be unconstitutional.

In reaction to the new election laws, five opposition parties combined to form the Slovak Democratic Coalition (SDC) in 1997. Mikuláš Dzurinda emerged as the spokesman and leader of the group. Parliamentary elections were held in September 2002, and three core center-right parties in coaltion returned Dzurinda as prime minister.

Dear editor of Nationsencyklopedia,
my name is Dusan Kovac, I am Slovak historian. I am editor of the book Slovakia in History which will by published in Cambridge University Press. Publishing house wanted as informaion for the potential reader to publish in the book a political map of Central EUROPE which shows position of Slovakia in Europe (with English description of names of the states and cities). The map that I have find on your website under: Slovakia - Political background, suits me very well for that purpose. Please write me, if you agree with its publishing and under which condition. My book is a scientific historical book about Slovak history.

Thank you for your answer