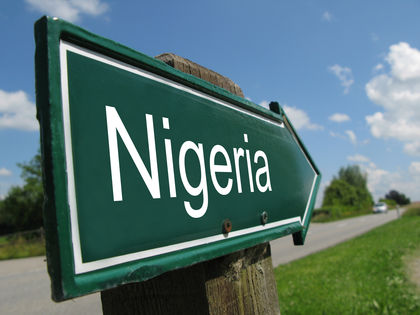 The return of democracy to Nigeria in 1999 improved the country's image abroad and allowed the country to take a more active and productive role regionally and on the global stage. Obasanjo has visited the United States and European nations to restore investment flows into Nigeria, but poor economic policy implementation has led to breakdown in relations with the International Monetary Fund (IMF) and a policy void in 2002. That void is likely to be filled because of intense political pressure on the IMF to support a re-elected civilian government in Nigeria.

Under Obasanjo's leadership, Nigeria has proven a powerhouse in the region in economic and security affairs. Without Nigeria, ECOMOG (West African Peace Monitoring Force) of ECOWAS (Economic Community of West African States) would be toothless, and African-led peacekeeping missions in Guinea-Bissau, Liberia and Sierra Leone would not have been possible. Nevertheless, Obasanjo has not resolved several border disputes between Nigeria and neighbors Benin, Niger, Chad, and Cameroon. Oral arguments on the land and maritime boundary disputes between Cameroon and Nigeria over the Bakasi Peninsula were presented to the ICJ, but the process requires drawing a new border between the two countries and has been marred by armed clashes. Nigeria also disputes the maritime boundary and economic zone in the Gulf of Guinea, which involves Equatorial Guinea.

Obasanjo has been instrumental in gathering African leaders to work towards establishing a code of conduct in economic and political reforms that would satisfy the conditions and expectations of Western donors. At the June 2001 Group of Eight summit in Genoa, Italy, Obasanjo was one of four leading African heads of state to unveil an Africaninitiated plan called the New Partnership for Africa's Development (NEPAD). NEPAD is designed to garner aid from donors in return for African commitments to good governance. Obasanjo has led a number of meetings on NEPAD including the March 2002 summit of leaders from 19 countries.

Nigeria is a member of the following international organizations: the UN and several of its special and related agencies, Organization of Petroleum Exporting Countries (OPEC), the African Union (AU), Organization of African Trade Union Unity (OATUU), Commonwealth, INTELSAT, Nonaligned Movement, and several other West African bodies. During the Babangida regime, Nigeria joined the Organization of the Islamic Conference (OIC).

Hi,
I so much like this article,our leaders should always remembered that they are representing the interest of the people voted for them "NOT" their's alone.
2
happiness

This article have enable me to know so many things about nigerian ploicies, but the leaders should care for the people espcially the less privilage.
3
Brett Geschke

To Whom It May Concern,

I am currently a Junior at Oakland University, in Rochester, Michigan, in the United States of America. I am currently participating in a model United Nations program, in which I am representing the Republic of Nigeria. There are four issues being debated on this year in the Human Rights Council, Palestine, Right to Food, Racial Discrimination, and Burma. I understand Nigeria's policy regarding the first three issues fairly well, but I have searched high and low for Nigeria's position on Burma, but I have found no substantive answers. If you could please give me the Republic of Nigeria's official position on the issue of Burma, I would greatly appreciate it. Any help would be very appreciated.

Thank you so much for your time.

Through this article, i have been able to know the foreign policies under obasanjo.
5
Akinyele Williams

I would say that obasanjo has done quite a lot for Nigeria. the only problem is cooperation among the governing body and improper policy implementation. Obasanjo helped to reestablish damaged foreign relations with Other countries after the draconic reign of Abacha and the military. Replacing Nigeria into the commonwealth of Nations after we had been suspended because of Abacha's extreme violations of Human right (Execution of Ken Saro wiwa and the Ogoni 8) Honestly, He tried for us. Corruption is the only thing militating against Nigeria's development.
7
Sophie Udeogu

The article is okey, but 75% of Nigerians are suffering internally. Nigerian foreign policies has to produce seen result locally.
8
Matthew Nweke

Yes, our foreign policies are really going well but its implementationis the case.
9
Hammed b hammed

please what were the foreign policies during Babangida's regime(1986-1993)?
12
Awonuga abiola

Honestly, going by the truism level of this article, erstwhile president, Olusegun Obasanjo really tried in redeeming our dented image in the international arena
13
Diya Damola

Chief Olusegun Obasanjo is a man Nigerians can never forget so easily. If we have 3 of his type in Africa, Africa will the world power in the nearest posible time. Remember where he left us and where we are today. Are we moving forward, backword or even static? Nigeria needs God's speedy intervention.
16
Segun

I'm a final year student of Nasarawa State University, please i will like to know the failure of Nigeria's foreign policy under former president Olusegun Obasanjo from 1999-2007
18
Sylvester Danborno

The nigeria foreign policies is doing well in the international sceen,but corruption has been the ben of implementation.what is this present administration doing about the state of things in it dormine.
19
Mofe

please can you expantiate on what Nigeria's internal policies were from 1999-2007, and explain how it affected Nigeria's external activities and foreign policies during that period.
20
boluwatife

Obasanjo is a presient that cannot be forgotten easily. His foreign policies helped in laundering the image of Nigeria at the international political community. He is the best material to handle the affairs of Nigeria. However, as a human being he has some waek points.
22
deebaba

I really want thank the writer of this article because it is a rich article that will go along way in educating not only Nigerians but also the outside world on Nigeria's foreign policy and also how Nigeria has helped a lot of other African countries attain their independence.