During the eighteenth and nineteenth centuries, Madagascar was ruled by the Mérina monarchy. After a short period of British influence, the French gained control by 1896. The country voted to become an independent republic within the French community in 1958 and established a Western-style democratic Constitution the following year. Full political independence was gained in 1960.

The first republic of Madagascar was led by Philibert Tsiranana until 1972. His government was overthrown in a national uprising protesting continued French influence. President Tsiranana was followed by General Ramanantsoa. Unable to satisfy the growing nationalist opposition, General Ramanantsoa resigned in 1975, and his successor, Colonel Ratsimandrava, was assassinated after only six days in office. Lieutenant Colonel Didier Ratsiraka formed a new government in June 1975. In December of that same year he won his first seven-year term as president. He was reelected to a second term in 1989. Chronic food shortages and student riots led to the growth of opposition parties, including Albert Zafy's Union Nationale des Democrates Chretiens (UNDC). Ratsiraka served three terms before he lost the 1993 elections to Albert Zafy. Zafy was impeached in 1996, and on 29 December 1996, Ratsiraka was returned to office.

A new Constitution was introduced in 1992, providing for a unitary state with a bicameral legislature. It was only in May 2001, however, that the Senate reopened—after 29 years of dormancy—to complete the framework of the government elaborated in the 1992 Constitution. In the meantime, a constitutional referendum in 1998 passed narrowly, giving the executive greater powers. The executive appoints a prime minister from a list of candidates nominated by the National Assembly. The prime minister appoints the Council of Ministers. Two-thirds of the members of the Senate are selected by an electoral college for a four-year term, and the remaining one-third are appointed by the president. The 150 deputies, who are members of the National Assembly, are elected for four years by universal suffrage—82 by single-member and 34 by two-member constituencies. A constitutional high court rounds out the framework.

Crisis ensued following the 16 December 2001 presidential election when challenger Marc Ravalomanana claimed to have won the election outright over incumbent Didier Ratsiraka, thereby eliminating the need for a run-off. The official results gave Ravalomanana 46.2%, forcing him into a runoff with Ratsiraka (40.9%). Albert Zafy (Rasalama) claimed 5.4%, Herizo Razafimahaleo 4.2%, D. Rajakoba 1.8%, and P. Rajaonary 1.6%. With Ratsiraka refusing to step down, Ravalomanana and his supporters mounted strikes and protests culminating in Ravalomanana's seizure of the presidency in February 2002. Violence between both sides broke out resulting in more than 70 deaths and considerable damage to physical infrastructure. U.S. recognition of Ravalomanana in June 2002 was followed by international approbation of his government, forcing Ratsiraka in July 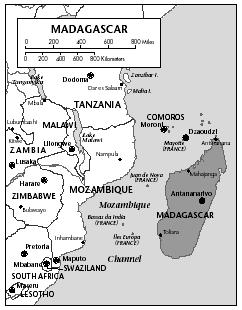 2002 to seek exile in France ending seven months of political and economic chaos in the country.