In April 1993, the vote for Eritrean independence also included the election of Afwerki to the position of president and chairman of the National Assembly. Afwerki thus enjoys control over both the legislative and executive branches of Eritrea's government. He is the head of government and commander in chief of the army. Afwerki has the authority to 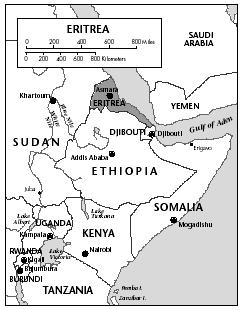 Afwerki states that he is dedicated to bringing democracy to Eritrea. Yet he has declared that democracy should be subservient to stability. Elections were promised for 1998 but did not take place. The ongoing border war with Ethiopia seemed to be the main obstacle to elections, although some complain about the lack of political openness in Eritrea. Although the opposition parties, most of which are remnants of the ELF, call Afwerki's government dictatorial, the great majority of the population does not seem to have complaints about his government. Afwerki, a Christian, has included Muslims in his cabinet. He has also declared his opposition to political parties based on religious or ethnic lines.