Like its West African neighbors, Equatorial Guinea experienced a long history of colonial rule under a series of European powers. Portugal claimed Fernando Po in 1494, hoping to establish a trade base there. The settlers who came to the island found the growing of sugar cane more lucrative, however, and they developed a thriving plantation economy instead. By the late sixteenth century, the slave population had outgrown the capacity of the plantations, and the settlers started moving their operations to Brazil. Fernando Po became a holding port for slaves who were to be shipped to the New World. In 1781, the British Navy occupied the island, using it as a base for its antislavery patrol and as a settlement for liberated slaves. These slaves became known as "Fernandinos"; their descendants still populate the island today.

Spain acquired the rights to Fernando Po and Annobon Island in 1844 and later added Rio Muni, forming the colony of Spanish Guinea, as the territories were collectively known. Under Spanish rule, Fernando Po was once again developed as a plantation economy, this time worked by a contract labor force of Nigerian migrants. Cocoa and coffee exports made the Bubi and Fernandinos living on the islands relatively prosperous, but Rio Muni was neglected, and the Fang tribe was left to eke out a survival through subsistence farming and fishing.

When Spain finally granted Equatorial Guinea its independence on 12 October 1968, the country was heavily stratified along ethnic and regional lines. Thus, in the first constitutional election, the Fang, determined to assert their numerical dominance, succeeded in electing Macías Nguema, a civil servant, as the country's first president. Nguema quickly surrounded himself with Fang supporters. Within a year, perceiving that their interests were dangerously threatened, the minority groups staged a coup. It failed, and Nguema's response was swift, far-reaching, and deadly. Unsure of himself and trusting no one, Nguema began what was to become a brutal reign of terror. The political murders, arrests, tortures, beatings, atrocities, and corruption perpetrated by his regime eventually reached throughout the country, devastating even his own ethnic group. In a country gripped by fear and distrust, Nguema held power until 1979, when he was overthrown in a violent coup by his nephew, then Lt. Colonel Teodoro Obiang Nguema Mbasogo. Macías Nguema fled but was soon arrested, tried, and convicted of genocide, murder, treason, violation of human rights, and misappropriation of 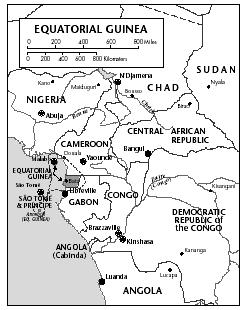 public funds. Nguema was executed by firing squad, along with six of his associates.