The General Assembly meets once a year in regular sessions that begin on the third Tuesday in September. Usually these sessions last about three months, ending before Christmas, but there is no fixed time limit, and many times the General Assembly has adjourned, continuing the session after the holidays. Special sessions on a particular topic may be held at the request of the Security Council, or of a majority of UN members, or of one member if the majority of members concur. An emergency special session may be called within 24 hours by the Security Council on the vote of any nine members, or by a majority of UN members, or by one member if the majority concur.

Through 2001, the Assembly convened 27 special sessions on issues that demanded attention over the years, including problems of Palestine, UN finances, Namibia, disarmament, international economic cooperation, apartheid, drugs, the environment, population, children, the advancement of women, and sustainable development of small island developing states.

Most of the substantive work during regular session is conducted through seven "Main Committees," which are reconstituted at every session. Each is composed of representatives of all member nations.

Since all the main committees are committees of the whole, the distinction between the General Assembly meeting in committee and meeting in plenum is largely one of protocol. Always conducted by the president or a vice president, plenary meetings are much more formal affairs. Normally, no one below the rank of head of delegation may actively participate in the proceedings, and no one is allowed to speak from his or her chair but must go to the speaker's rostrum. (None of the conference rooms in which the committees meet is provided with a speaker's rostrum.) The Assembly Hall itself is reserved for plenary meetings and is rarely used by the committees.

It is in plenary meetings that all formal or ceremonial functions occur: opening and closing of the General Assembly session, election of officers and members of other organs, adoption of resolutions and decisions on all agenda items, and addresses by heads of state or government or by other high national officials who visit the UN while the General Assembly is in session. Plenary meetings also constitute the forum for the statements of general policy that the head of each member delegation is entitled to make as part of what is known as the "general debate," which takes place during the first three weeks or so of the regular session. Because of the great number of questions which the General Assembly is called upon to consider (over 170 agenda items at the 2001–02 session) it allocates most questions to its six main committees.

Each member of the General Assembly and its committees has one vote. Article 18 of the charter decrees that decisions on "important" questions shall be made by a two-thirds majority of the members present and voting. Among the important questions specified are recommendations with regard to maintenance of peace and security; election of the nonpermanent members of the Security Council and of the members of the Economic and Social Council and the Trusteeship Council; admission of new UN members, suspension of rights and privileges of membership, and expulsion of members; questions relating to the operation of the trusteeship system; and budgetary questions. Decisions on other questions, including the determination of additional categories of important questions requiring a two-thirds majority vote, are made by a simple majority of the members present and voting. The phrase "members present and voting" means members casting either affirmative or negative votes; members who abstain are considered as not voting. Thus, although the number of abstentions is usually listed for information purposes, it does not count in the final tally as to whether a resolution has received the requisite majority—provided that the rules of quorum have been observed. A quorum is constituted when a majority of the members are present; no decision may be taken without one. The president of the General Assembly, however, may declare a meeting open and permit the debate to proceed when at least one-third of the members are present. The chairman of a main committee may open a meeting when one-quarter of the members are present.

Voting may be by a show of hands, by roll call, or, in certain instances such as elections, by secret ballot. The normal method was intended to be by a show of hands, but any member can request a roll call. There has been an increasing tendency to do so, especially on the more contentious issues. Before a roll-call vote is taken, a lot is drawn to determine the country that is to vote first. Starting with that country, voting proceeds according to the alphabetical order of the official names of states in English. Mechanical voting equipment was installed in the Assembly Hall and first used at the 1965 session. Similar equipment is used in some conference rooms.

The charter allows each member state a maximum of five representatives in the General Assembly. Most members, in addition to their five representatives, send five alternative representatives and a number of advisers to each session. Six seats are assigned to every delegation in the Assembly Hall. Both in the hall and in conference rooms, delegations are seated in alphabetical order according to the official names of the countries in English. The seating is rearranged before each session by drawing lots to select the country with which the alphabetical seating will start.

At each regular session, the General Assembly constitutes itself anew. During the opening meetings, the main officers are elected, who serve until the end of the session. If a special or emergency session is called, it is normally presided over by officers elected in the previous September.

The first officer to be elected is the president. Delegates vote by secret ballot, and a simple majority suffices. In choosing the president, regard has to be paid to the equitable geographical rotation of the office among the following groups of states: African, Asian, Eastern European, Latin American, and Western European and other states. By tacit agreement, no representative of a permanent member of the Security Council ever is elected president of the General Assembly or chairman of a committee. 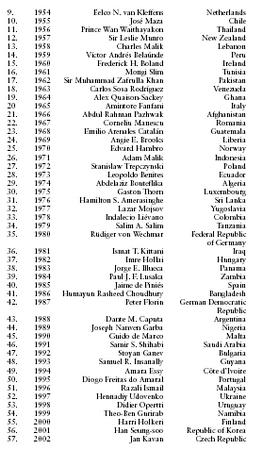 Following the election of the president, the main committees are officially constituted and retire to elect their own officers. Here again the matter of equitable geographical representation arises, and it is precisely regulated by a resolution adopted by the General Assembly in 1963. Of the six committee chairmen, one must be chosen from African, Asian, Eastern European, Latin American or Caribbean, and Western European or other states. The sixth chairmanship rotates over a period of twenty sessions between African, Asian, and Latin American and Caribbean states.

The final officers to be elected are the 21 vice presidents. Of these, 16 are elected in accordance with a geographical pattern: six from African states, four from Asian states, three from Latin American and Caribbean states, two from Western European and other states, and one from an Eastern European state. (The election of the president of the General Assembly has the effect, however, of reducing by one the number of vice presidencies allocated to the region from which the president is elected.) The remaining five vice presidents represent the permanent members of the Security Council: China, France, the Russian Federation, the United Kingdom, and the United States.

hey can you give me some informations about Poland in participating at the GA 6?!