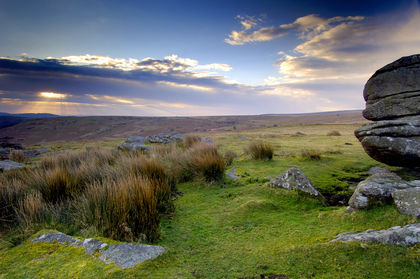 With its mild climate and varied soils, the United Kingdom has a diverse pattern of natural vegetation. Originally, oak forests probably covered the lowland, except for the fens and marsh areas, while pine forests and patches of moorland covered the higher or sandy ground. Over the centuries, much of the forest area, especially on the lowlands, was cleared for cultivation. Today only about 9% of the total surface is wooded. Fairly extensive forests remain in east and north Scotland and in southeast England. Oak, elm, ash, and beech are the most common trees in England. Pine and birch are most common in Scotland. Almost all the lowland outside the industrial centers is farmland, with a varied seminatural vegetation of grasses and flowering plants. Wild vegetation consists of the natural flora of woods, fens and marshes, cliffs, chalk downs, and mountain slopes, the most widespread being the heather, grasses, gorse, and bracken of the moorlands.

The fauna is similar to that of northwestern continental Europe, although there are fewer species. Some of the larger mammals—wolf, bear, boar, and reindeer—are extinct, but red and roe deer are protected for sport. Common smaller mammals are foxes, hares, hedgehogs, rabbits, weasels, stoats, shrews, rats, and mice; otters are found in many rivers, and seals frequently appear along the coast. There are few reptiles and amphibians. Roughly 230 species of birds reside in the United Kingdom, and another 200 are migratory. Most numerous are the chaffinch, blackbird, sparrow, and starling. The number of large birds is declining, however, except for game birds—pheasant, partridge, and red grouse—which are protected. With the reclamation of the marshlands, waterfowl are moving to the many bird sanctuaries. The rivers and lakes abound in salmon, trout, perch, pike, roach, dace, and grayling. There are more than 21,000 species of insects.

21,847 bugs inhabit most of england marches. The most common of the insects is the Caddiysfly.
2
selena

This is an excellent article that I believe will be of great help to you.
3
Hilary Duff

My daughter, Lisa, is doing a project on england's flora and fauna and she found that this webpage was great help to her.
4
School Kid

really helpful to my report!hope to use this site again soon!
7
Amethyst

This is very helpful to me. I was doing a geography project on england and this helped tons!
8
Mehul

this website helped tons but the flora section could use more detailed information.
10
Allison Salmon

I really like this website. It helped a lot. I am definitely recommending this site to my friends.
11
Alena

Thank you very much for this website. I'm preparing for english exam and it helped me a lot.
12
sowhat

Really helped and really informational. thank you. it was really helpful on my report
13
bub

Doing my geography project. This is amazing source!
16
Watch Dogz

I'm doing a school project on England (even though I am not one of its residents) on a food web of flora/fauna in that area. I find this to be very informational and helpful towards the project. Thanks you! :D
17
Jay siwach

Actually , I didn't get the exact answer which I was trying to search. I wanna search the climatic condition required for the flora of U.K ...