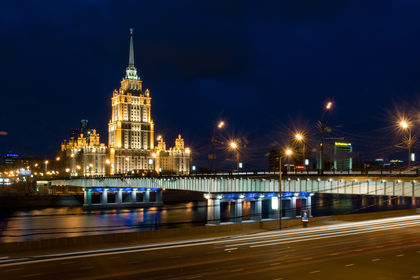 Ukraine's environmental problems include the nuclear contamination which resulted from the 1986 Chernobyl accident. One-tenth of Ukraine's land area was affected by the radiation. According to UN reports, approximately one million people were exposed to unsafe levels of radiation through the consumption of food. Approximately 3.5 million ha (8.6 million ac) of agricultural land and 1.5 million ha (3.7 million ac) of forest were also contaminated.

Pollution from other sources also poses a threat to the environment. Ukraine releases polluted water, heavy metal, organic compounds, and oil-related pollutants into the Black Sea. The water supply in some areas of the country contains toxic industrial chemicals up to 10 times the concentration considered to be within safety limits.

Air pollution is also a significant environmental problem in the Ukraine. In 1992, Ukraine had the world's seventh-highest level of industrial carbon dioxide emissions, which totaled 611.3 million metric tons, a per capita level of 11.72. In 1996, the total had dropped significantly to 397 million metric tons. The pollution of the nation's water has resulted in large-scale elimination of the fish population, particularly in the Sea of Azov.

As of 2001, only 1.6% of Ukraine's total land area is protected, including 22 Wetlands of International Importance. Fifteen mammal species, 10 bird species, and 20 plant species are threatened, including the European bison, the Russian desman, and the Dalmatian pelican.

Thanks a lot! It really helped me to write a topic and I hope it'll help me to pass my English)
3
asia

i think that they should really change their economy issues because it seems like they have alot of problems!!!
4
Max

Asia: I fully agree with you)) I'm from Ukraine and I don't really rely on our government)) It seems to me they covered more information from their people))
5
gg

good job really helpful good grades thanks to this
6
Serhy

Good job! I am from Ukraine but it amazing!So I must add some becouse you need 50!
7
Denys

I need a little more information about that radiation.
8
j m

Oh my god thank you so much! Your article really helped me out with a civics project...and dont worry, i cited you:)
10
g

What are they trying to do about the nuclear stuff though?
11
Paris

thanks. this helped me a lot on my project for the geography of ukraine! :)
12
lolly

Thanks For The Help It Was A Big Help. It Gave Me A Positive Point For My Project. Thanks Again
14
italy man

Thank you for this Great information this has really helped my social studies project on Ukraine.
16
bayli

wow this helped me with my homework! this is the only site that would give me the right information! lol
17
George Cotzas

Thanks so much for this!! It was extremely helpful with my homework. This is the only website where I could get an answer that makes sense. Thanks again.
19
ashtyn

thanks this helped me with my geography project a lot!!!
20
Robin

Thank you so much!! This really helped me with my project!!
22
Alexia

Thank you! This helped me with my project! Thank you so much!
23
Tayla

This helped me so much with a class project. I got a 100 because of this website.
24
VideoPortal

Here contains materials about the environment. About the the world around through the eyes of Ukrainian. The problems of ecology, destruction of natural resources, cruelty in our country.Â
25
CARRYSSA

Thank you for the very informative article it helped with the A I got on my final.
26
Abhay Khuttan

THANK U SO MUCH! ive been searching for this for hours yaar!!
27
Needed This 4 Skool

Thanks This helped me alot and now i am going to pass on my project!!
28
Makaiya Johnson

Thanks for the information helped me a lot with my MUN project.
31
me

thanks this was for a writing essay for English class