In 1993, the former Swedish Broadcasting Corporation was broken up and its subsidiaries became independent. One operates the two television networks, one is responsible for educational radio, and another for the four national and local radio channels and Radio Sweden, which broadcasts internationally in several languages. As of 1999, there were a total of 5 AM and 360 FM radio stations and 163 television stations. In 2000 there were 932 radios and 574 television sets for every 1,000 people. The same year there were about 507 personal computers in use for every 1,000 people, with 29 Internet service providers serving 5.6 million customers. In 1998, there were an estimated 6 million main line telephones in Sweden and an additional 3.8 million mobile cellular phones.

The Swedish press is said to be the oldest in which censorship is legally forbidden. The first regular newspaper, Post-och Inrikes Tidningar, appeared in 1645 and is still published. The first daily was Norrköpings Tidningen (1758). There are no newspaper chains in Sweden, since most newspapers and periodicals are privately owned. In 2001, there were 169 daily newspapers and 455 weeklies.

News is drawn largely from the Swedish News Agency (Tidningarnas Telegrambyra—TT), an agency owned by the Swedish press. The accompanying table lists political orientation and average daily circulation figures for leading newspapers in 2002: 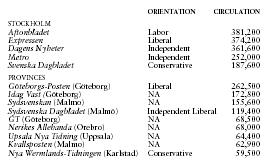