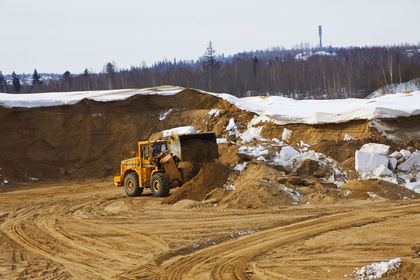 With bountiful and diverse minerals, Russia, the world's largest country in land area, occupying 75% of the former Soviet Union, had a significant percentage of the world's mineral resources and produced 14% of the world's total mineral extraction. Mining was the country's leading industry in 2002, and Russia was the largest producer of palladium and nickel (20% of world output), and ranked second in the production of aluminum and platinum-group metals (PGMs), third in potash, sixth in gold, and seventh in mine copper. Russia also produced a large percentage of the CIS's bauxite, coal, cobalt, diamond, lead, mica, natural gas, oil, tin, zinc, and many other metals, industrial minerals, and mineral fuels. Enterprises considered part of the mineral and raw-material complex contributed 70% of the budget revenues derived from exports; petroleum, petroleum products, and natural gas were Russia's leading export commodities in 2002; metals and chemicals also were leading export commodities.

Output of iron ore was 86.63 million tons in 2000, 81.31 million tons in 1999, and 72.34 million tons in 1998; increased demand from the domestic metallurgical sector spurred the rise. Iron ore output was at 77% of the 1990 level (better than other metals), and product quality has been maintained. The largest producer was Kursk Magnetic Anomaly, at Zheleznogorsk and Gubkin, with a 50 million ton per year capacity.

Despite decreased metal output compared with the Soviet period (e.g., 20% as much tin), Russia was producing more aluminum, lead, and zinc in 2000 than during the Soviet era. Ten percent of the technology employed in the nonferrous mining and metallurgy sector was rated as world class, labor productivity was one-third below that of advanced industrialized countries, and energy expenditures were 20%–30% higher. Another problem was that the resource base for metallurgical enterprises was not competitive in terms of quality, with the exception of antimony, copper, nickel, and molybdenum. More than one-half of industrial mineral output was exported, depriving the domestic sector of needed supplies, especially barite, bentonite, crystalline graphite, and kaolin. Russia has not been successful in attracting foreign investment for developing its mineral deposits, because of high and unpredictable taxes, an unreliable legal system, insecure licensing, inequity in the treatment of domestic and foreign partners, a weak banking system, and the inability to directly export commodities.

I just thought it was an interesting peace on the minning industry in Russia and abroad. i know you mentiond some of this before.
2
RAEANNE

I just thought it was an interesting peace on the minning industry in Russia and abroad.
3
Mario

Great article. I am impressed with Russia's potential and want to visit the country one of these days. I work in small mining opperations in South America (mostly copper & gold) and would love to hear some business opps within there.