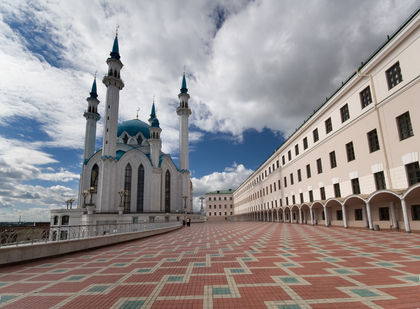 Most of the country has a continental climate, with long, cold winters and brief summers. There is a wide range of summer and winter temperatures and relatively low precipitation. January temperatures are in the range of 6° C (45 ° F ) on the southeastern shore of the Black Sea. A record low temperature of -71° C (-96 ° F ) was recorded in 1974 at the northeast Siberian village of Oymyakon, the lowest temperature ever recorded anywhere in the world for an inhabited region. In many areas of Siberia the soil never thaws for more than a foot.

Annual precipitation decreases from about 64–76 cm (25–30 in) in the European region to less than 5 cm (2 in) a year in parts of Central Asia. The tundra has long winters, with summers lasting one or two months, and receives from 8 to 12 months of snow or rain. The far northern forest, like most of the country, has long severe winters, short summers, and extremely short springs and autumns. Precipitation is low but falls throughout the year, varying from 53 cm (21 in) at Moscow to between 20 and 25 cm (8–10 in) in eastern Siberia. The steppes have very cold winters and hot, dry summers.

it could at least tell me what the higest temperatures are...>.
2
raeanne

thanx for the info. this really helped me with my project.
6
Michael Hayward

Thank you for this information I am planning a trip to Russia but I am extremely overweight and if it isn't cold enough I will die of hyperthermia.
7
ashley

This website is awesome it has really good info. I needed for my culture day project
8
Lila

Would you be able to help me answer this question well for starters the infromation was good but cn you put it in a simpler form becasue i don't understand it.
9
Narly Charlie

Helpful source, thanks for doing this, whoever you are.
12
John

hmm, this actually helped me. im working on a russia project for school.
14
nicolette

That helped sooo much it is awesome. My teacher is going to be so proud of me. thank you
15
Karina

thanks alot for this information! it helped me alot:)
18
daniel

Thank you for the data:)
this site is pretty good
20
marucs

I am writing a story that includes Russia... and I need to know the specific information because I want the story to be full of snow and such. :D
23
kaka

it was very clear and stright forward. thanks a lot.
24
poo

thank you it really helped :D IT REALLY HELPED WITH MY WORK
26
demin dove

I love this website, it has a lot of good information about Russia
28
chris