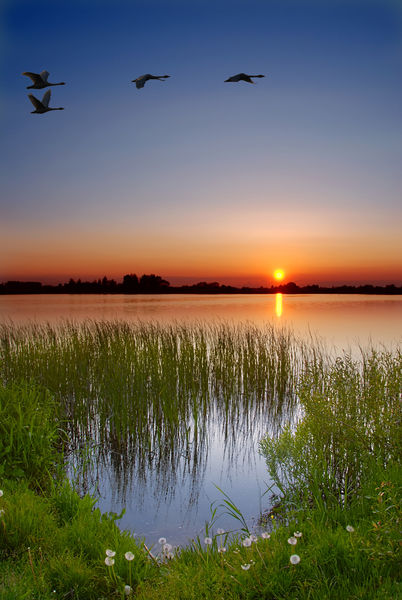 Poland's environmental situation has improved since the ouster of its communist regime, which has been accompanied by decreased emphasis on heavy industry and increased government awareness of environmental issues. However, Poland has yet to recover from the overexploitation of forests during World War II and the loss of about 1.6 million hectares (4 million acres) of forestland after the war. As of the mid-1990s, 75% of Poland's forests have been damaged by airborne contaminants and acid rain.

Pollution of the air, water, and land were the most significant environmental problem facing Poland in the 1990s. Air pollution results from hazardous concentrations of airborne dust and chemicals including carbon dioxide, nitrogen compounds, fluorine, formaldehyde, ammonia, lead, and cadmium. In 1992 Poland had the world's 12th highest level of industrial carbon dioxide emissions, which totaled 341.8 million metric tons, a per capita level of 8.9 metric tons. In 1996, the total rose to 356 million metric tons. Industry-related pollution affects particularly the Katowice region, where dust and sulfur dioxide emissions exceed acceptable levels. Water pollution in the Baltic Sea is 10 times higher than ocean water. Poland has 55 cu km of renewable water. Two percent is used to support farming and 64% is for industrial purposes. Poland's cities generate on average 5.7 million tons of solid waste per year. The nation's wildlife has also suffered from degeneration of its habitats. As of 2001, 9.1% of Poland's total land area was protected. Ten mammal species were endangered. Six bird species and one type of plant are also threatened with extinction. The cerambyx longicorn and rosalia longicorn are among the endangered species.

This website is amazing! It has almost everything I need to know for my World Studies Project! This information is extremely helpful as well. Keep up the good work!
2
Rougnaleht

This site has really useful information on topics that affect today. I'm glad I came.
3
Polish

This site has some ov the stuff I need for my social studies progtict. Thx
4
elijah

LIKE IT NEEDED IT FOR PROJECT IN SOCAL STUDIES KEEEP THIS SITE NEVER GET RID OF IT;HELPS ME ALOT MY WHOLE CLASS USED IT FOR GREAT INFO!
5
Julia

This website had everything I needed for my freshman summer project! I'm so glad I found it! The information has been a lifesaver! Thank you!
6
FallingSkywards

Really nice info for research! Thanks a lot! Really helped me out!
7
FallingSkywards

Really nice info for research! Thanks a lot! Really helped me out!
8
Akram Elhage

Some good stuff. This information really helped with my World Geo project. Thanks a lot, lovin it!
9
Poland Project

This site is amazing.I'm doing a project on Poland right now.And this is all I needed to finish it up! thank's guys.
11
Another Poland Project

Is this god's work?
This has saved me from getting an F