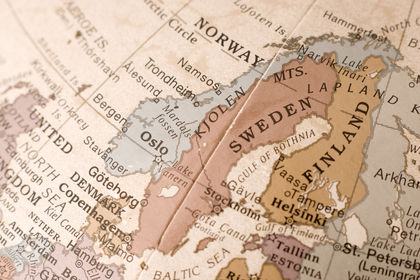 Norway occupies the western part of the Scandinavian peninsula in northern Europe, with almost one-third of the country situated N of the Arctic Circle. It has an area of 324,220 sq km (125,182 sq mi). Comparatively, the area occupied by Norway is slightly larger than the state of New Mexico. Extending 1,752 km (1,089 mi) NNE-SSW , Norway has the greatest length of any European country; its width is 430 km (267 mi) ESE-WNW . Bounded on the N by the Arctic Ocean, on the NE by Finland and Russia, on the E by Sweden, on the S by the Skagerrak, on the SW by the North Sea, and on the W by the Norwegian Sea of the Atlantic Ocean, Norway has a land boundary length of 2,544 km (1,581 mi) and a total coastline estimated at 21,925 km (13,624 mi).

Norway's capital city, Oslo, is in the southern part of the country.

this is a very informational web page. I would diffonatily use this again
2
Heidi

This was very helpful to me.

i thank you so much.

This information helped me with a school project.=]]

This site was very helpful for my report on Norway, it had all the things i needed for it.

Oh my god !
I just love the person so much that did this article:)
It helped me sooo much on my school project!
Im really glad that this article is up on google so once again thanks:)
I LOVE YOU SO MUCH BABBIE
5
tatyana

this article on norway helped me alot and i hope i get an A+ on my project for my materacademy teacher Ms.Calle she is a very strict teacher amd i hope she likes this thank u lot
Sincerely, Tatyana Vanessa Rodriguez
6
Aaron

THANK YOU SO MUCH YOU ARE AWESOME! This really helps me on my project. Again thank you!
7
Anna

this site was really helpful on my school project!!!
8
Charlotte

Thankyou you so much you really help me on my project of Norway!
9
andrew

what do you think about walking the entire length of Norway in 2 months?
10
samuel

Are there Filipinos living in Norway? If yes,do they have an Association? If no,thanks anyway.