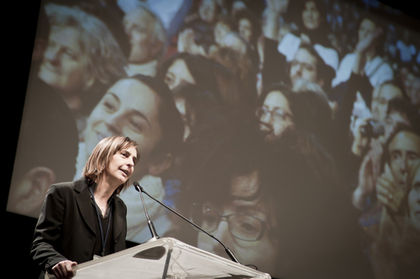 Italy has a complex system of political alignments in which the parties, their congresses, and their leaders often appear to wield more power than parliament or the other constitutional branches of government.

Basic party policy is decided at the party congresses—generally held every second year—which are attended by locally elected party leaders. At the same time, the national party leadership is selected.

The most important political party traditionally has been the Christian Democratic Party (Partito Democrazia Cristiana—DC), which stands about midway in the political spectrum. In the 1983 national elections, the DC commanded 32.9% of the vote and won 225 seats in the Chamber of Deputies, down from 38.3% and 262 seats in 1979; in 1987, however, its electoral strength increased again, to 34.3% and 234 seats. From 1948 until 1981, the prime minister of Italy was consistently drawn from the ranks of the DC, whose religious and anti-class base constitutes both its strength and its weakness. Its relationship with the Church gives it added strength but also opens it to criticism by lay parties. Since it attracts its membership from all classes, the DC is also the most prone to internal dissension. As a result of scandals and corruption charges, the DC has lost considerable support, especially to regional movements in the north. The DC contested the 1994 election under the Pact for Italy Coalition.

To the right and the left of the DC stand a wide range of parties. The most important of these is the Italian Communist Party (Partito Comunista Italiano—PCI), the largest Communist party in Western Europe. The PCI had been second in power and influence only to the DC, but in the 1980s, its electoral base declined, despite the fact that it effectively severed its ties with both the former USSR and Marxism-Leninism. In 1987, the PCI won only 24.6% and 177 seats, down from 29.9% and 198 seats in 1983 and 34.4% and 228 seats in 1976. It is now two parties: Communist Refounding and the Democratic Party, or the left.

Two center-left parties, the Italian Socialist Party (Partito Socialista Italiano—PSI) and the Italian Social Democratic Party (Partito Socialista Democratico Italiano—PSDI) combined in 1966 to form the United Socialist Party, but following a split in 1969, both reemerged as separate parties. In 1987, the PSI won 94 seats in the Chamber of Deputies, a gain of 21 over 1983, and the PSDI took 17 seats, a decline of 6 from 1983.

The Italian Republican Party (Partito Repubblicano Italiano— PRI), which was liberal on civil and human rights but conservative on economic issues, scored impressive gains in 1983, raising its number of deputies from 16 to 29, but in 1987, it gained only 21 seats; during 1981–82, Giovanni Spadolini, PRI party secretary, served as prime minister, Italy's first non-DC head of government since 1948. The Italian Liberal Party (Partito Liberale Italiano— PLI) also advanced in 1983 by winning 16 seats, for a gain of 7, but gained only 11 seats in 1987. The Radical Party (Partito Radicale) was active on social issues in Italy, having sponsored the 1974 referendum on divorce; in 1983, it won 11 seats in the Chamber, and in 1987, 13 seats. Other parties have included, on the extreme right, the Italian Social Movement (Movimento Sociale Italiano—MSI), which elected 42 deputies in 1983 and 35 in 1987, and, on the far left, the Proletarian Democracy (Democrazia Proletaria—DP), which elected seven deputies in 1983 and eight in 1987. The Greens, an environmentalist group that entered the elections for the first time in 1987, won 13 seats.

Between 1946 and 1962, the PSI acted in unity with the PCI, forming an opposition bloc of about 40% in the Chamber. In early 1962, a new type of government—a center-left coalition— was formed, uniting the DC with all the leftist parties except the PCI. The crux of this government was a working alliance between the DC and the PSI, which previously had been closely bound to the PCI. The objectives of the alliance were to isolate the PCI by drawing the PSI closer to the center parties and to undercut the Communists' popularity by legislating needed social and economic reforms. Center-left coalitions continued to form the governments after 1962, but these alliances were notoriously unstable. Furthermore, the alliance of the moderate left parties with the weakened DC actually strengthened the Communists as an opposition party in the 1970s.

In the late 1970s, a "historic compromise" was reached between the DC and the Communists, who were allowed to participate in the policy-making (1977–79) but had no direct role in the government. The strong gains made by the smaller political parties in 1983 led to the formation of a five-party coalition government (DC, PSI, PRI, PSDI, and PLI) under PSI leader Bettino Craxi on 4 August 1983. This marked the first time that a Socialist held the premiership. His government, which lasted until June 1986, was the longest postwar government. In July 1987, Giovanni Goria was confirmed by the Chamber of Deputies as the new DC prime minister; in November, however, his government collapsed when the PLI withdrew from the governing coalition. Goria formed a new government, but it collapsed in February 1988.

The April 1996 election saw a resurgence of the left as the Olive Tree coalition, anchored by former communists calling themselves the Party of the Democratic Left (PDS), gained 284 seats in the 630-seat Chamber of Deputies and 157 seats in the 315-seat Senate. The Refounded Communists won 35 seats in the Chamber of Deputies, the separatist Northern League 59, the center-right Freedom Alliance 246, and others 6. The elections of April 1992 failed to resolve Italy's political and economic problems. The election of March 1994 under new voting rules resulted in the following distribution of seats in the Chamber (lower house): Alliance for Freedom, 42.9% (Forza Italia, Northern League, National Alliance—366 seats); Progressive Alliance, 32.2% (Democratic Party, or the left, Communist Refounding, Democratic Alliance, Greens, Reformers—213 seats); and Pact for Italy, 15.7% (Popular Party, others— 46 seats).

In the May 2001 election, Berlusconi's right-leaning coalition, the House of Liberties, was comprised of his Forza Italia (Go Italy) party; the National Alliance, Northern League, Christian-Democratic Center Party; United Christian Democrats; and the New Italian Socialist Party. This coalition won 368 seats in the Chamber of Deputies, and 177 in the Senate. The Olive Tree coalition—composed of the Democrats of the Left, the Daisy Alliance (including the Italian Popular Party, Italian Renewal, Union of Democrats for Europe, and the Democrats) the Sunflower Alliance (including the Greens and the Italian Democratic Socialists), and the Italian Communist Party—came in second with 242 seats in the lower house (128 in the Senate). The Communist Refounding took 11 seats in the Chamber of Deputies, and the Olive-Southern Tyrols People's Party of German speakers secured 5 seats in the lower house.

WELL DONE. I LOVE THIS INFORMATION ITS VERY USEFULL