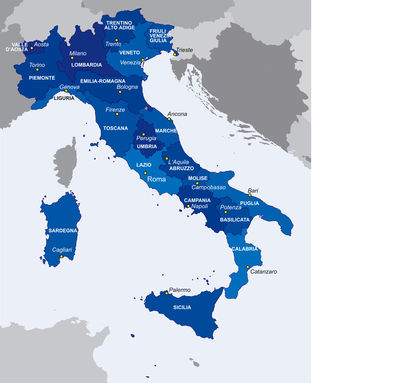 The long-disputed problem of Trieste, a 518 sq km (200 sq mi) area situated at the head of the Adriatic Sea, between Italy and Yugoslavia, was resolved in 1954, when Italy assumed the administration of Zone A, the city and harbor of Trieste, and Yugoslavia of Zone B, the rural hinterlands of the Istrian Peninsula. A treaty of October 1975 made the partition permanent.

Italy's capital city, Rome, is located in the west-central part of the country.

I am working on a project and have been trying to get information about Italy's location. I have searched for hours surfing across different sites until I finallt found this one. It gives soooo much information. This site really helped me out.

THANKS SO MUCH FOR ALL THE INFO. REALLY NEEDEDD IT.K.BYE

Thanks! I thought I'd never find it! Thanks a bunch!!
MizzyKay
4
harry good

This is absoloutley amazing,who ever made this site is a geniuos.
Thank you soo much much love Mr Harry Good
5
alice

heyy
thanks for everything. i thought i would never find what i needed for this project of mine. it is exactly what i needed!
*~Alice~*
6
relieved

Oh my gosh!
This website in genius!
Thank you SO much!
I needed it for my report on Italy.
Thanks Again,
Kali
8
Nikki

thankx a bunch this site helped alot for my italy project!!!!!
9
Gaia

Hiya! My name is Gaia and I am 9 years old. I am in Year 5 and our teacher has set a project. We have to find information about a European Country and turn it into a Powerpoint or Booklet. I am half Italian so I abviously chose Italy. We need a fact page with the population, capital city, currency, longest river, tallest mountain and the size of your country. I couldn't find any website which gave you the size of the website until I found you. Thanks loads for supplying me with some information about Italy! Bye!
10
Dave

Thanks a ton. This really helped me on this project I'm doing. I've been browsing for hours but this is one of the best sources I've seen.
Thanks a ton, Dave.
11
christina

this was the only site i found that gave me the info i needed for my extra gredit project. no other sites i looked at had any usable info. id been looking for about 2 hours. thanx so much this site helped a lot.

Can anyone tell me the distance, if I were to walk along the coastline from Ventimiglia to Trieste (not including Sardinia, Sicily and other islands). I'm planning to do a very very long walk for charity... Thanks!
13
Georgia

This so called Great website doesn't sectionise pargraphs enough, but it did help still so thanks a lot.
15
flash

hey
i have to do a country report on italy and this is the only site that gives me what i needed.
17
fahad

I want the description of italy which consist location, tourism and live there.
18
Kelly

This web page TOTALLY saved my life. I have to do a oral and visual presentation and I need to do a writing project. So, this REALLY helped. Thank goodness we have the Internet.
19
subham

This didn't really help me!! I still need to find out Descriptions of Italy's location!! THANKS SOO MUCH,, for Nothing a good website though xx
21
sexy

Thank you!!!I needed this stuff for a project at school.
24
Awesome

Wow!I've looked at 50 different websites and none have as realistic facts and solid info as this website!Thank you Encyclopedia of the nations!
25
Valentino Procida

I have been wondering what the size of Sicily was for a long time, and I thank you for answering my question for me.
26
Ryan

this information is really helpful for a project I'm doing. thanks for the info.
27
Franco Minaudo

Thanks a lot man this assessment really mean't a lot to me! Good information here! Thanks again for the info! ~Ballislife
29
*~Autumn~*

I am so happy I found this I'm doing a project on my heritage and my mom is full Italian and so is my dad but I live in America I'm so glad to learn this!
30
shakira

this site was not what I was looking 4, bit it has good info
31
aryan

very very useful,helped me alot. helped me in doing my geog project thanks alot