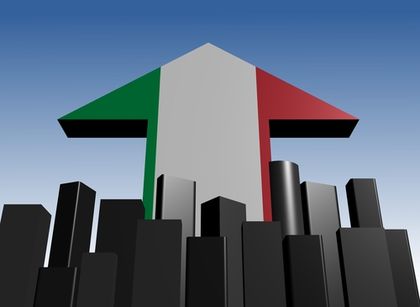 Under Mussolini, business and labor were grouped into corporations that, in theory at least, jointly determined economic policy. Also, under the Fascist regime, direct government control over the economy was increased through the creation of powerful economic bodies, such as the Institute for Industrial Reconstruction. Although the corporative system disappeared after the fall of Mussolini, the concept of economic planning remained firmly implanted among the large Marxist parties, as well as among Christian Democratic leaders, who—by different means and for different reasons—sought to create a society free from the class warfare associated with a strictly liberal economic system.

Principal government objectives following World War II were reconstruction of the economy; stabilization of the currency; and long-term, large-scale investment aimed at correcting the imbalance of the Italian economy and, in particular, the imbalance between northern and southern Italy. The first and second phases of this policy were accomplished by 1949. Then the government, supported by domestic financial and industrial groups and by foreign aid, principally from the United States, embarked on the third and most important phase, best known as the Vanoni Plan (after former finance minister Ezio Vanoni). Notable in this development effort has been the Cassa per il Mezzogiorno, a government agency set up to develop southern Italy and attract private investment to the region. Between 1951 and 1978, government spending on infrastructure in the south was $11.5 billion; additional low-cost loans totaled $13 billion, and outright grants amounted to $3.2 billion.

Simultaneously, direct government control of the economy increased through such government agencies as ENI, whose activities expanded rapidly in the postwar era. The nationalization of the electric industry, in order to lay the industrial base for a more highly planned economy, and the creation of the National Economic Planning Board composed of leaders from government, industry, and labor are further indications of the importance attached to the concept of a planned Italian economy.

The combined effects of inflation, increased energy prices, and political instability posed serious economic problems during the 1970s. With Italy mired in recession in the early 1980s, economic policy was directed at reducing the public sector deficit, tightening controls on credit, and maintaining a stable exchange rate, chiefly through a variety of short-term constraints. A period of recovery began in 1983, leading to expanded output and lower inflation but also to expanded unemployment. The economic policy aims in 1987 included the reduction of the public-sector deficit and unemployment. Furthermore, improvement in the external sector (due mainly to the fall of oil prices and depreciation of the dollar) led to liberalization of the foreign exchange market in May 1987.

Priorities of the early 1990s were cutting government spending, fighting tax evasion to reduce public debt, and selling off state-owned enterprises. At the end of the decade the results of these policies were mixed. Liberalization provided the impetus for greater foreign investment, while the funds generated from privatization eased the public debt. Italy qualified for the first round of European Monetary Union (EMU) and entered the euro zone in 1999. Tax evasion remains a problem; the underground economy is still estimated at nearly 25% of official GDP. Moreover, the economic disparities between the prosperous north and the impoverished south remain.

The strength of the economy rests on the back of small- and medium-sized family-owned companies, mostly in the north and center of the country. In 1999, the average Italian company employed 3.6 people, and industrial companies had an average of8.7 employees, compared with an average 15 employees in the EU. In mid-2000, Italy's largest state holding company, Istituto per la Ricostruzione Industriale (IRI), was liquidated.

Yes there are some spelling errors, and no GDP is correct - Gross domestic product
2
APAPA JOE SMITH