Georgia has been notorious for mismanaging its budget. In 1999, the IMF put one of its programs in the country on hold because Georgia could not meet the conditional budgetary targets the IMF set forth. A more realistic budget in the second half of 2000 paved the way for a new IMF program beginning in January 2001. Georgia's progress towards those new budgetary goals has been uneven, but it has remained on track. 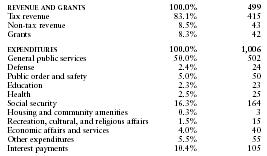