The finance bill is presented to the Folketing yearly; the fiscal year follows the calendar year. As a general rule, the budget is prepared on the "net" principle, the difference between receipts and expenditures—surplus or deficit—of public undertakings being posted to the revenue accounts. By far the largest amounts of public expenditure are for social security, health, education and research, unemployment insurance, pensions, allowances, and rent subsidies.

Under a new tax reform plan, agreed upon by the government and the Danish People's Party in March 2003, Danish citizens will receive tax relief in 2004, although at a lesser rate than originally was hoped. Denmark has yet to accept the euro as its currency, although it meets all the criteria set forth by the European Monetary Union to do so. The 1993 Finance Act serves as an example of how revenue is only to a limited degree spent on the public sector's own operational and initial expenditure, but mainly repaid to citizens. Out of the Kr340 billion the government had at its disposal in 1993, 46% was to be sent back to individual citizens as income transfers. In addition, the government transferred 12% of the budget to municipalities in the form of block grants, which also will largely end up as transfer payments to individuals. 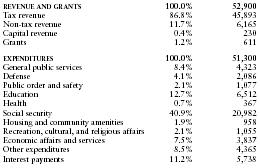