The decline in Denmark's trade balance since the end of World War II resulted in a serious deterioration in the balance-of-payments position, particularly since 1960. In the late 1960s, the course of Denmark's international economic activity paralleled trends in continental Europe, with high trade and capital flow levels being accompanied by a deteriorating current-account position; this condition continued into the early 1970s. The Danish government had hoped that Denmark's entry into the EC would reduce the country's persistent deficit and bring the balance on current account into a more favorable position, but this was not the case in the late 1970s. Although current account deficits were reduced somewhat in 1980–81, thanks to the devaluation of the kroner and the restrictive income and fiscal policies implemented in 1979–80, the deficit again increased in 1982 and by 1985 was at the highest level since 1979. In 1990, after a century of deficits, the balance of payments showed a surplus of $1.3 billion, and peaked at $4.7 billion in 1993. In 1994 the surplus dropped to $2.7 billion, but by 2002 it stood at $8.4 billion. The surplus has allowed Denmark to begin repaying its large foreign debt, which peaked in 1988 at $44 billion, or 40% of GDP. (External debt stood at $21.7 billion in 2000.) Net interest payments on debt continue to be a burden, accounting for about 10% of goods and services export earnings.

The US Central Intelligence Agency (CIA) reports that in 2002 the purchasing power parity of Denmark's exports was $56.3 billion while imports totaled $47.9 billion resulting in a trade surplus of $8.4 billion.

The International Monetary Fund (IMF) reports that in 2001 Denmark had exports of goods totaling $50.9 billion and imports totaling $44 billion. The services credit totaled $26.9 billion and debit $23.5 billion. The following table summarizes Denmark's balance of payments as reported by the IMF for 2001 in millions of US dollars. 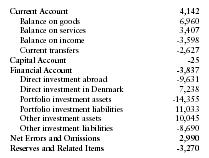