The fiscal year follows the calendar year. The IMF and World Bank have granted Croatia $192 million and $100 million, respectively, to repair economic imbalances from war and to curb hyperinflation. The EBRD has approved financial support totaling $230 million for infrastructure, telecommunications, and energy projects which otherwise would be unobtainable by the Croatian government.

The US Central Intelligence Agency (CIA) estimates that in 2001 Croatia's central government took in revenues of approximately $8.6 billion and had expenditures of $9 billion. Overall, the government registered a deficit of approximately $400 million. External debt totaled $16.5 billion. 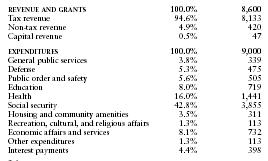