An annual budget for all levels of government, becoming effective on 1 January, is voted by the National Assembly, after having been prepared by the Ministry of Finance. The disintegration of the communist system in November 1989 and the subsequent collapse of the Soviet trade bloc caused severe economic disruption, pushing the government's budget deficit to 8.5% of GDP in 1990 (not including interest payments on commercial foreign debt). However, by the late 90s the country was seeing unprecedented growth (5.8% in 2000), due to agressive market reforms put in place by the government during the prior decade.

The US Central Intelligence Agency (CIA) estimates that in 2001 Bulgaria's central government took in revenues of approximately $5.6 billion and had expenditures of $5.7 billion. Overall, the government registered a deficit of approximately $110 million. External debt totaled $10.3 billion. 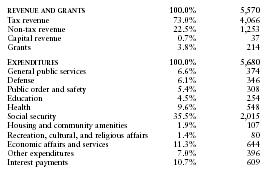