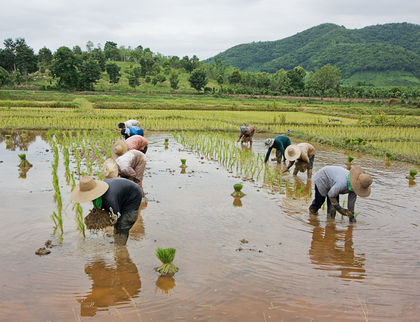 The Thai government, vulnerable in its financial dependence on a few primary commodities (rice, rubber, tin, and teak), has pursued a policy of economic diversification through industrial development and increased agricultural production. With the beginning of the first development plan in 1961, the government committed itself to the primacy of private enterprise and to a policy of fostering and assisting it. Thailand has also followed a policy of foreign trade and exchange liberalization. Foreign exchange control is nominal.

Thailand's first five-year plan, covering the period 1961–66, aimed to raise the standard of living by means of greater agricultural, industrial, and power production. In the second development plan (1967–71), emphasis was placed on agricultural development, highways, irrigation, education, and industrial development in the private sector. The third development plan (1972–76) placed special emphasis on improvements in the rural infrastructure, growth in the financial and commercial sectors, and further assistance to crop diversification and to import-substitution industries. The government also committed itself to a reduction in the role of state-owned enterprises. The first three plans did much to increase the standard of living and to bring new roads, irrigation schemes, and land reform to the prosperous Bangkok region. But these changes also increased the income gap between rural and urban Thailand and drew increasing numbers of migrants to the city in search of work. Accordingly, the fourth economic plan, covering the years 1977–81, emphasized decentralization of industry and economic growth from the capital region to the provinces. It also ended the policy of encouraging import-substitution industries and began the promotion of export-oriented industries able to benefit from the nation's low wage rates. Plans were made for the establishment of industrial estates under the direction of the Industrial Estate Authority of Thailand. The first estate, at Bangchan, 30 km (19 mi) from Bangkok, was fully occupied in 1980 by 51 companies, producing a range of industrial products, including automotive and electrical equipment, chemicals, and processed food. Another industrial estate, established in 1979 at Lard Krabang, also in the Bangkok vicinity, includes, in addition to a general industrial area, a duty-free export-processing zone open to manufacturers willing to establish high value-added and labor-intensive industries for export.

The fifth development plan, covering the years 1982–86, stressed reduction of rural poverty and social tensions and expansion of employment opportunities in the poorer regions. To this end, four investment promotion zones were established. After completion in 1981 of the natural gas pipeline from the Gulf of Thailand, investment priority was reassigned to the Eastern Seaboard Development Program. This ambitious program called for the creation of a new urban-industrial complex in the Rayong-Sattahip region that was expected to draw industries from the congested Bangkok area. Heavy industries were to be emphasized, with early construction of a natural gas separator and plants for the manufacture of soda ash, fertilizers, and petrochemicals. The sixth national economic and social development plan (1986–91) stressed continuing export promotion, streamlining of the public sector, and strict monetary and fiscal policies, with growth targeted at only about 5% yearly. Emphasis was placed on the less capital-intensive industries, and more emphasis was given to improved utilization of resources. The plan targeted private sector investment and initiatives. Privatization of state enterprises would proceed in clear-cut phases, and enterprises were required to seek their own revenue. Agricultural production was forecast to grow at 2.9% per year. The development of small-scale industry, particularly in rural areas, was emphasized. In 1993, the Eastern Seaboard Development Plan southeast of Bangkok—begun 10 years before as a US $4 billion investment—demonstrated results with the new port, Laem Chabang. This plan extends greater Bangkok, and the next phases include extending all main national arteries into fourlane highways and double-tracking the railway.

The sixth national development plan coincided with the early part of Thailand's ten-year boom, and most of its economic targets were more than met. The actual average annual rate of real GDP growth—10.5%—was more than twice the targeted 5%. In the seventh development plan, 1992 to 1997, coinciding with the second half of the decade of boom, targets had shifted to a stronger emphasis on balanced, sustained development, and less on growth per se. The plan was formally titled the seventh national development and social development plan. The three official emphases were 1) sustained, moderate growth (though with the target set at a rather heady 8.2% annual real growth rate); 2) redistribution of income and decentralization of planning to achieve reductions in the percent in poverty and in the widening gap between rich and poor; and 3) human resource development. To attain the goals, four sets of policy guidelines were stipulated: policies for stable, noninflationary growth; policies of income redistribution; policies for human resource development and policies for environmental protection. The real GDP growth target was met, though with concern that this was through a combination of a explosive industrial sector growing at an above-target average annual rate of 11.4% and a moribund agricultural sector, growing as below-target annual rate of 1.5%. Inflation averaged only 4.13% a year, better than the 5.6% targeted, but goals to eliminate Thailand's large balance of trade and current account deficits were not met. The average annual savings rate of 9.1% also fell below the plan's ambitious target of 12.8%. Poverty reduction, however, was substantial, with the percent of the population living in poverty falling from 32.6% in 1988 to 11.4% in 1996, which would prove to be its lowest point due to the on-set of the Asian Financial Crisis the next year.Themes for each region guided development. In the north (Chiang-mai, Lamphrun, and Lampang), light and clean industries are encouraged, such as clothing, high-value electronics, and agro-industry. In the south, transport links and natural gas networks developed between the Andaman Sea and the Gulf of Thailand would attract heavy industry such as petrochemicals, and cross-border development with Malaysia would link with Penang's industrial sector. Development plans for the impoverished northeast included linking with Laos, Cambodia, and Viet Nam for processing raw materials from those countries, and for providing services involved with investment and manufacturing in those countries.

Thailand's eighth national development and social development plan, emphasizing again the concern with qualitative as well as quantitative growth, coincided with the onset of the Asian Financial Crisis and Thailand's struggle back to pre-crisis levels of economic activity, 1997 to 2001. The Plan, assuming a continuation of economic growth, put priority on two long-range economic development goals: human development and the replacement of top-down administration with bottom-up processes. Virtually none of the goals of the plan were met as the economy was plunged into recession and high inflation with the collapse of baht in July 1997. Whereas about a million people a year had been lifted out of poverty during the decade of boom, from 1997 to 1999 about a million and a half a year were plunged back into poverty, as the estimated number in poverty rose from 6.8 million to 9.8 million (16% of the population), and probably continued to increase into 2001. In August 1997 the eighth economic plan was essentially superceded by the IMF-guided international bailout program that involved a three-year, $17.2 billion support package conditioned on a program of economic reforms. The IMF program did provide from the outset for "the protection of vital health and education expenditures in the central government budget," and, in fact, health expenditures rose by 8% 1997/98 even as revenues fell. The government adhered sufficiently close to the reform program to bring down inflation and replenish foreign reserves, undergirding the reforms with a new constitution. Thailand began repaying the IMF in November 2000 and repaying other lenders in 2001. Net capital flows were negative throughout the five-year planning period but by 2001 had improved to a -$4.9 billion balance from -$12.6 billion in 1998.

The introduction of the ninth national development and social development plan, to run 2001 to 2006, took a philosophical turn as the government presented it as embodying the king's concept of "sufficiency economy" as its guiding principle bestowed on the people as a means of helping his subjects overcome the economic crisis. "Sufficiency economy" was explained as based on adherence to the middle path, and involving moderation not just as a guide for economic policies but as a way of life. Balanced development was to be achieved through a combination of patience, perseverance, diligence, wisdom and prudence. The four pillars of the holistic approach of the ninth plan are social protection, competitiveness, governance, and environmental protection. Within this relatively abstract framework, the more specific elements of the Thaksin government's economic policy strategy in 2001 included the following seven elements: 1) farm debt restructuring, including a three year suspension of some debts owed by poor farmers to state banks; 2) village funds financed by grants of one million baht (about $24,000) to each of the country's roughly 70,000 villages to provide locally administered micro-loans; 3) the transfer of non-performing loans (NPLs) to the newly established (as of June 2001) Thai Asset Management Corporation (TAMC), required of state-owned operations and voluntary for private ones, to promote more efficient debt restructuring.; 4) special attention to small- and medium-sized enterprises (SMEs) by state-owned lending agencies; 5) promotion of product specialization by village groups, called the "one tambon (group of five or six villages), one product" scheme inspired by a similar Japanese program; 6) the establishment of the People's Bank, administered through the Government Savings Bank (GSB), allowing GBS account-holders to apply for small loans (up to about 30,000 baht or $370) mainly for small retailing or commercial ventures; and 7) a restructuring of the economy away from heavy dependence on imports and towards more reliance on local resources, especially agricultural.

This article is so much information that I want to know for NESDB plan. But I would like to know more about 1st to 10 year plan and what are the failure and success of each plan. I am studying sufficiency economy and NESDB plan for my exam.Thank you for kindly sharing of your information to extend of our knowledge.
Master Student from Myanmar
Chaing Mai University
2
merid getachew

i have a test based on Thailand, it's socio economic development and and its growth or full information that u can send me through my e=mail
3
bubbles