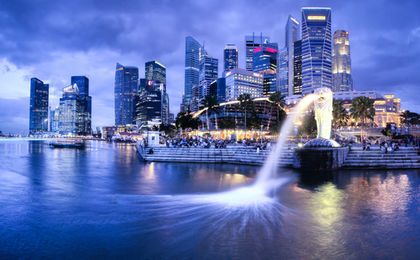 The Republic of Singapore, the second smallest country in Asia, consists of Singapore Island and several smaller adjacent islets. Situated in the Indian Ocean off the southern tip of the Malay Peninsula, Singapore has an area of 693 sq km (268 sq mi). Comparatively, the area occupied by Singapore is slightly more than 3.5 times the size of Washington, D.C. Singapore Island extends 41.8 km (26 mi) ENE – WSW and 22.5 km (14 mi) SSE – NNW and has a coastline of 193 km (120 mi), including about 84 km (52 mi) along the water channel between the island and the Malay Peninsula. Singapore is connected to the nearby western portion of Malaysia by a causeway 1,056 m (3,465 ft) in length across the narrow Johore Strait. Singapore's position at the eastern end of the Strait of Malacca, which separates western Malaysia and the Indonesian island of Sumatra, has given it economic and strategic importance out of proportion to its small size. Singapore's capital city, Singapore, is located on the country's southern coast.

Thanks you for these informations : ) More thank for if you do another countries : )
2
Roger

Thank-you for this information.

I never realised how small the country was until I was playing with google maps.
I had always thought that it was around the size of its cousins, wasn't I mistaken !

thanx 4 the info that i needed 4 a project :) ill definately come on again :$
4
Singaporean

Thank you very much for the info! I was trying to figure out how small Singapore is in comparison with other countries' state cities. This helped a lot. Thank you!
5
amrit

Thank-you for this information.

I never realised how small the country was until I was playing with google maps.
I had always thought that it was around the size of its cousins, wasn't I mistaken !

Thanks a lot for the info. It helped me a lot in my project.I will get my info from here from now on(:
7
zy

Thanks for the information! It was really helpful for my geography essay
8
yk

Based on the numbers in Wikipedia, Singapore is about the same size as Chicago, but twice the population!
9
karen

thank you for the information, it was helpful for me to plan my holiday, and work out distances inbetween holiday attractions.
10
joanna

Ive been to singapore on a stopover from the uk but never realised how small it is thanks.
12
mahesh