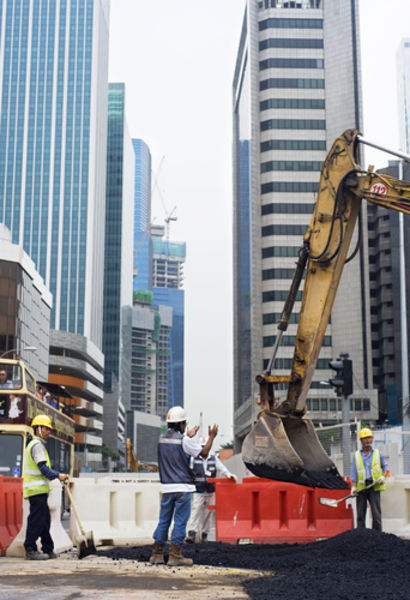 Singapore's major industries were once rubber milling and tin smelting. The modern industrialization of Singapore began in 1961 with the creation of the Economic Development Board to formulate and implement an ambitious manufacturing scheme. Most of the first factories set up under this program were of an import-substitute nature requiring tariff protection, but many such protective tariffs were subsequently withdrawn. Large-scale foreign manufacturing operations in Singapore commenced in 1967 with the establishment of plants by several major multinational electronics corporations. The Jurong Town Corporation was established under the Jurong Town Corporation Act of 1968 to develop and manage industrial estates and sites in Singapore. The emphasis was on upgrading facilities to attract high-technology and skill-intensive industries. The manufacturing sector grew by an average annual rate of about 20% during the 1962–74 period, and it registered an average annual increase of over 10% from 1975 to 1981.

Industry's share of the GDP rose from 12% in 1960 to 29% in 1981. Such dramatic achievements were in large measure made possible by the existence in Singapore even before the 1960s of one of the most developed economic infrastructures in Southeast Asia, as well as by government efforts to provide a skilled, disciplined, and highly motivated work force. Labor-intensive operations are encouraged to move offshore by the government, and service and high-technology industries are encouraged. Major industries are electronics, financial services, oil drilling equipment, petroleum refining, rubber processing and rubber products, processed food and beverages, ship repair, and biotechnology. In 1998, industry accounted for 35% of GDP, and manufacturing for 22%. In 2001, estimates were that industry contributing 33% of GDP and employed about 33% of the labor force. Of the components of the industrial sector, manufacturing contributes about 25% to GDP and construction about 6.8%. Within manufacturing, electronics have in recent years been dominant, account for about half manufactured output, with chemicals second. According to Singapore's Economic Development Board, the electronics sector accounts for about 48% of investment in manufacturing; chemicals, about 24%; engine ring, 17%; and the biomedical sector, about 9%. In 2000 electronics grew by 15%, and it was mainly the contraction in this sector by 5.3% in 2001 than led to the overall GDP contraction of 2%. Countercyclically, construction declined 4.6% in 2001, but grew 11.9%in the first quarter of 2001 primarily due increased public sector spending on infrastructural projects such as land reclamation and mass transit railways

Petroleum refining is a well-established industry in Singapore. After Rotterdam and Houston, Singapore is the world's third largest refining center. Production capacity from five refineries (capable of processing 40 different types of crude oil) was 1.3 million barrels per day. The petrochemical industry has grown rapidly as a direct result of Singapore's refinery capacity. Current a large project to reclaim seven islands to forma 12-square mile petrochemical complex on Jurong Island is in progress. A $200 million synthetic gas plant has recently been built on Jurong Island by the Messer Group of Germany and Texaco of the US. Also, Singapore's second naptha cracking plant was launched in 2002 by the Petrochemical Corporation of Singapore and its partners, Phillips Petroleum, the Polyolefin Company, Hoechst and Seraya Chemicals. The Petrochemical Corporation of Singapore is a government-linked company (GLC). GLCs are majority government-owned but operate commercially, unlike traditional parastatals. GLCs account for more than 60% of Singapore's GDP. Industrial GLCs include Singapore Technologies (aerospace and electronics manufacturer); Keppel Corporation (oil drilling and related equipment manufacturer); Sembawang Corporation (construction and environmental engineering); Chartered Semiconductor Manufacturing, Singapore Telecom Petrochemical Corp. of Singapore, and Singapore Refining Corp.

Really helps with researches!!!!!!!!! It answers all the questions that are needed to be answered, as well as other important information/facts.
2
MANSOURE

This article was really helpful for my assessment. I couldn't have done it without this article!