Since World War II, Singapore has changed from an entrepôt center for the incoming and outgoing traffic of its neighbors in Southeast Asia to an exporting power in its own right. The leading exports of the mid-1960s—rubber, coffee, pepper, and palm oil—were replaced in the early 1980s by a variety of capital-intensive manufactures. Except for an occasional slowing, annual levels of trade regularly record double-digit expansion. During the late 1990s, expansion in the high-end manufacturing and services sectors began replacing capital-intensive production.

Most of the advanced electronics that Singapore exports also take up a substantial percentage of the world export market. The following chart shows the top eight exports:

In 2000 Singapore's imports were distributed among the following categories:

Singapore's main trading partners are the ASEAN group— principally Malaysia—the US, Malaysia, China and Hong Kong, and Japan. Principal trading partners in 2000 (in millions of US dollars) were as follows: 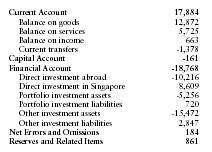 Thank you. You may not know of the significance of spreading knowledge, but you will definitely be rewarded. Thanks a lot.