Although Oman is a relatively small oil producer, oil revenues support 69% of government expenditures. The government owns 60% of Petroleum Development (Oman) Ltd. (PDO), the main oil company. Higher oil prices in 1997 and a 5% cut in capital spending produced a budget deficit of only $47 million, a substantial improvement over 1996. With the fall in global oil prices in 1998, however, the government's budget fell deeply into deficit, and had to be financed by loans and by drawing down the State General Reserve Fund. In anticipation of still further drops in the price of oil, the government increased a number of taxes and imposed spending cuts of between 5 and 10% on most government ministries. 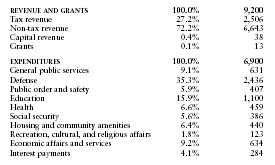