The original settlers are thought to have been castaways who drifted to Nauru from another Pacific island. The first recorded discovery of Nauru by a Westerner was made by Captain John Fearn of the whaling ship Hunter in November 1798. He named the island Pleasant Island. From the 1830s to the 1880s, the Nauruans had a succession of visitors—runaway convicts, deserters from whaling ships, and other men who can be classed as beachcombers. The beachcombers provided the Nauruans with their first real contact with Western civilization and introduced them to firearms and alcohol. They acted as a buffer between two cultures but were often a bad influence on the Nauruans. Several times beachcombers and Nauruans attempted to cut off and capture visiting ships, so that eventually Nauru came to be avoided as a watering place by ships whaling in the area. The advent of firearms also disturbed the balance of power between the tribes on the island; sporadic tribal warfare culminated in a 10-year civil war from 1878 to 1888 that reduced the native population to less than 1,000.

The British and German imperial governments agreed to the partition of the Western Pacific in 1886. Their purely arbitrary line of demarcation left Nauru in the German sphere of influence quite accidentally. It was not until 1888, on the petition of the beachcombers-turned-traders, that the German government annexed Nauru as a protectorate and disarmed the people. Christian missionaries arrived in 1899 and had a greater impact on the Nauruan culture than did the German administration.

In 1901, Sir Albert Ellis, a New Zealand geologist, discovered that there were large deposits of phosphate on both Nauru and Banaba (then called Ocean Island). Phosphate mining on Nauru began in 1907, after the German government had granted a concession to the British-owned Pacific Phosphate Co. Laborers from the German Caroline Islands were hired because the Nauruans had no interest in working in the mines.

Nauru was occupied by the Australian Expeditionary Force in 1914, and phosphate continued to be shipped all through World War I. In 1919, Nauru was made a League of Nations mandate of the British Empire, and the governments of Australia, New Zealand, and the United Kingdom agreed to administer the island jointly through an administrator to be appointed by Australia. At the same time the three governments obtained the mandate, they jointly purchased the Pacific Phosphate Co.'s rights to Nauruan phosphate for UK £3.5 million and began to work the deposits through a three-man board called the British Phosphate Commissioners (BPC).

The phosphate industry expanded greatly in the years between the wars. Australian and New Zealand farmers enjoyed substantial savings, for Nauru phosphate was sold at a much lower price than phosphate from other countries. As for the Nauruans, with their small royalty of eightpence a ton in 1939, they opted out of the industry completely and turned to their own culture for sustenance.

War came to Nauru in December 1940, when the island was shelled by a roving German raider, and four phosphate ships were sunk. Nauru was flattened by Japanese bombings beginning in December 1941, and all its industrial plant and housing facilities were destroyed. The Japanese occupied the island from August 1942 until the end of the war three years later. They deported 1,200 Nauruans to build an airstrip on Truk, a small atoll about 1,600 km (1,000 mi) northwest of Nauru, and many died there. Australian forces reoccupied Nauru in September 1945, and the surviving Truk Nauruans, who had been reduced in number to only 737, were repatriated in January 1946. Nauru's population thus fell from 1,848 in 1940 to 1,369 in 1946.

The three mandatory governments placed the mandate of Nauru before the UN. On 1 November 1947, the UN approved an agreement by which the island became a trust territory administered jointly by Australia, New Zealand, and the United Kingdom, who were to share the task of developing self-government on the island. The Nauruans had a Council of Chiefs to represent them since 1927, but this body had advisory powers only. Dissatisfied Nauruans made a number of complaints to the administering authority and to the UN Trusteeship Council, with the result that a Nauruan local government council was established by the election of nine council members in December 1951. Since control of the council was exercised by the administrator, however, the Nauruans continued to press for further political power. They asked for positions of importance in the administration and an increase in royalty payments, and expressed concern about the future of the island because the increased rate of phosphate exportation would, it was feared, exhaust the deposits by the end of the century. By constant negotiations, the Nauruans forced the BPC to pay royalties on a rights rather than needs basis, and with the establishment of a world price in 1964, phosphate royalties were raised. The Nauruans achieved control of the industry in 1967 by purchasing the plant and machinery owned by the BPC, and in 1970 they took over the industry completely.

Meanwhile, in 1964, Australia had attempted to resettle the Nauruans on Curtis Island, off the coast of Queensland. The Nauruans, although in principle not averse to resettlement, refused it because of political considerations. They wanted to own their island and to maintain their identity by political independence. Australia would not agree to this, and the plan collapsed. This failure reinforced the Nauruans' desire for political independence. With the support of the Trusteeship Council, they established an elected Legislative Council in 1966. Although Australia wished to maintain control of defense and external affairs, the Nauruans insisted on complete self-determination. Thus, on 31 January 1968, the 22nd anniversary of the return of the Nauruan survivors from Truk, Nauru became the smallest independent republic in the world. Since that time, Nauru has pursued a policy of isolation and nonalignment, although it does have a role in Commonwealth affairs. In October 1982, Queen Elizabeth II visited the island, the first British monarch to do so. Nauru established diplomatic ties with the former Soviet Union in 1988. Nauru filed a claim in 1989 for compensation from Australia at the International Court of Justice for the loss of nearly all its topsoil from phosphate mining during the League of Nations mandate and the UN trusteeship. In July 1992 Nauru hosted the 24th South Pacific Forum heads of government meeting, which focused on environmental issues, including opposition to nuclear testing in the area. Nauru's first president Hammer DeRoburt died on 15 July 1992 in Melbourne, Australia. Australia agreed to pay A $2.5 million for 20 years, and New Zealand and the United Kingdom additionally agreed to pay a settlement of $12 million each in August 1993 to settle the loss of topsoil case.

Incumbent president Bernard Dowiyogo lost his 1995 bid for reelection to Lagumot Harris in 22 November 1995. However, a series of no-confidence votes over the succeeding years brought several changes in what has come to be called a "revolving door" presidency. Dowiyogo was returned to office for the fifth time, following an election in April 2000. On 29 March 2001, he was forced from office in a political crisis over the alleged involvement of a Russian organized crime syndicate in Nauru's financial activities. Nauru has been blacklisted by international financial monitoring organizations and banks for its role as a tax haven and money laundering center. Dowiyogo was replaced by 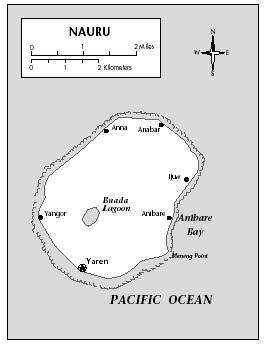 René Harris, who held the presidency until 8 January 2003, when a no-confidence motion was passed against him. His ouster from office was linked to his support for Australia's "Pacific Solution" to exclude asylum-seeking boat people. In 2001, Nauru agreed to accept hundreds of Afghan and Iraqi asylum seekers from Australia in return for millions of dollars in aid. Harris was also accused of corruption and was blamed for Nauru's dire financial situation: Nauru had a budget deficit in 2002 of approximately US $40 million, almost half of its GDP. Following the vote of noconfidence against Harris on 8 January 2003, parliament voted numerous times on who would be elected president. He was replaced by Dowiyogo, who then died following heart surgery in the United States on 9 March 2003. Derog Gioura was named acting president. General elections were held on 3 May 2003, and Harris was returned to parliament, along with Gioura. As of 8 May, it was unknown who would be named president of Nauru.

really good info thanks it was really good for my geography project i couldnt have done it without this website.it would be good if u could tell me where you got all of this information.