Malaysia's economy, heavily industrial and heavily dependent on export revenues, experienced a bump in the road when the US economy began to slow down at the end of 2000. The United States is a key trading partner for Malaysia, so as exports to the United States fell, so did Malaysia's economy. The government introduced two fiscal stimulus packages in 2001, but neither did the job; at the time, analysts suspected that GDP would grow less than 1% on the year. 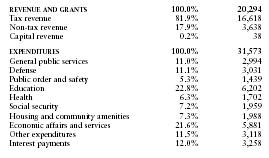