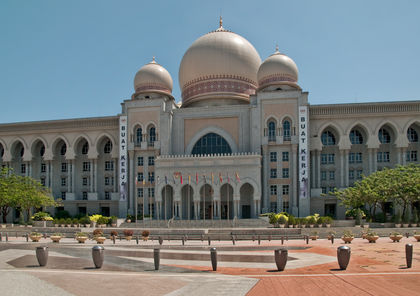 Malaysia has a unified judicial system, and all courts take cognizance of both federal and state laws. The legal system is founded on British common law. Most cases come before magistrates and sessions courts. Religious courts decide questions of Islamic law and custom. The Federal Court, the highest court in Malaysia, reviews decisions referred from the High Court of Peninsular Malaysia, the High Court of Sabah and Sarawak, and subordinate courts. The Federal Court, of which the yang dipertuan agong is lord president, has original jurisdiction in disputes among states or between a state and the federal government. The Federal Court consists of the chief justice, the two chief judges from the High Courts, and seven other judges. Administrative detention is permitted in security cases, in which certain other guarantees of due process are reportedly suspended.

The judiciary has traditionally functioned with a high degree of independence. Most civil and criminal cases are fair and open. The accused must be brought before a judge within 24 hours of arrest. Defendants have the right to counsel and to bail. Strict rules of evidence apply in court and appeal is available to higher courts. Criminal defendants may also appeal for clemency to the paramount ruler or to the local state ruler. Severe penalties, including the death penalty, are imposed for drug-related offenses.

High courts have jurisdiction over all serious criminal cases and most civil cases. The sessions courts hear the cases involving landlord-tenant disputes and car accidents. Magistrates' courts hear criminal cases in which the maximum sentence does not exceed 12 months. The Court of Appeals has jurisdiction over high court and sessions court decisions.