Robust export performance turned the ROK's overall balance of payments deficit into a $1.7 billion surplus in 1986, which grew to $12.1 billion in 1988. Since then, the balance of payments surplus has declined; in 1990, the balance of payments had a deficit of $274 million because of declining exports, rising imports, and a current account deficit. Over the long term, growth in exports will depend on industry's efforts to regain competitiveness lost through wage increases, labor unrest, and exchange rate changes. The deficit grew to over 4% of GDP in 1996, before subsiding in 1997 due to a shrinking currency base.

The US Central Intelligence Agency (CIA) reports that in 2002 the purchasing power parity of South Korea's exports was $159.2 billion while imports totaled $146.6 billion resulting in a trade surplus of $12.6 billion.

The International Monetary Fund (IMF) reports that in 2001 South Korea had exports of goods totaling $151.4 billion and imports totaling $138 billion. The services credit totaled $29.6 billion and debit $33.1 billion. The following table summarizes South Korea's balance of payments as reported by the IMF for 2001 in millions of US dollars. 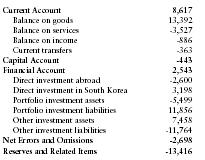 this is a good website which provide the good n useful information to all users.
2
alex

i LOVED this website! it taught me a lot as i am slightly unable to learn:)
3
simon emmanuel wadi

Bop of south Korea has any implication on trade with India?