There is evidence of human habitation in present-day Kazakhstan from the earliest Stone Age, more than 300,000 years ago. The steppe characteristics of most of the region are best suited for nomadic pastoralism, which an ever-shifting pattern of peoples have pursued in this territory. Achaemenid documents give the name Sacae to the first such group to be historically recorded. In the 3rd and 2nd centuries BC they were displaced by the Usun in the east, the Kangiui in the south central region, and the Alani in the west.

The first well-established state was that of the Turkic Kaganate, in the 6th century AD , replaced in the early 8th century by the Turgesh state. In 766, the Karluks established dominance in what now is eastern Kazakhstan. Some of the southern portions of the region fell under Arab influence in the 8th–9th centuries, and Islam was introduced. Western Kazakhstan was under Oghuz control in 9th to the 11th centuries; at roughly the same time the Kimak and Kipchak tribes, of Turkic origin, controlled the east. The large central desert of Kazakhstan is still called "Dashti-Kipchak," or the Kipchak Steppe.

The Karluk state was destroyed by invading Iagmas in the late 9th and early 10th centuries. They formed the Karakhanid state, which controlled extensive lands into what is now China. The Karakhanids were in a constant state of war with the Seljuks, to the south, and control of parts of what is now Kazakhstan passed back and forth between them. The Karakhanids collapsed in the 1130s when they were invaded by Khitans, who established the Karakitai state. In the mid-12th century, Khwarazm split off from the weakening Karakitais, but the bulk of the state survived until the invasion of Genghiz Khan from 1219–1221.

Kazakhstan was part of Batu's Golden Horde, which in the 14th century broke up into the White Horde and Mogulistan. By the early 15th century, the White Horde had split into several large khanates, including the Nogai Horde and the Uzbek Khanate.

The present-day Kazakhs formed in the mid-15th century when clan leaders Janibek and Girei broke away from Abul Khair, leader of the Uzbeks, to seek their own territory in Semirechie, between the Chu and Talas rivers. First to unite the 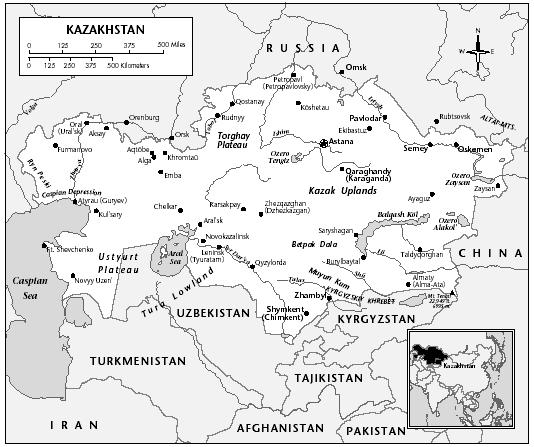 Kazakhs into one people was Khan Kasym (1511–23). When the Nogai Horde and Siberian Khanates broke up in the mid 16th century, tribes from both joined the Kazakhs. The clans separated into three Hordes: the Great Horde, which controlled Semirechie; the Middle Horde, which had central Kazakhstan, and the Lesser Horde, which had western Kazakhstan.

Russian traders and soldiers began to appear on the northwestern edge of Kazakh territory in the 17th century, when Cossacks founded the forts which became the cities of Uralsk and Gurev. The Kazakh khanate was in disarray at the time, badly pressed by Kalmyk invaders who had begun to move in from the east. Pushed west in what the Kazakhs call their "Great Retreat," the Kazakh position deteriorated until, in 1726, Lesser Horde khan Abul'khair requested Russian assistance. From that point on the Lesser Horde was under Russian control. The Middle Horde was conquered by 1798. The Great Horde remained independent until the 1820s, when pressure from both the Kokand Khanate and Russia forced them to choose what they regarded as the lesser of evils, the Russians.

There was, however, considerable resistance, led by Khan Kenen (Kenisary Kasimov), of the Middle Horde, whose followers fought the Russians 1836–47. Khan Kenen is now regarded as a Kazakh national hero. Russian attempts to quell this resistance led to establishment of a number of forts and settlements in Kazakh territory, which made Kazakh nomadism impossible and destroyed the Kazakh economy.

In 1863, Russia promulgated a policy in the Gorchakov Circular which asserted the right to annex "troublesome" border areas. It was on this basis that Russian troops began the conquest of Central Asia. Most of Kazakhstan was made part of the Steppe district of the Russian empire; the rest was in Turkestan.

Beginning in the 1890s Russian settlers were aggressively moved into fertile lands in northern and eastern Kazakhstan, further displacing the nomadic Kazakhs. Between 1906 and 1912 more than a half-million Russian farms were started as part of the Stolypin reforms. By the time of the 1916 uprising the Kazakhs were broken and starving. Despite a strong effort against the Russians, they were savagely repressed.

At the time of the revolution a group of secular nationalists called the Alash Orda attempted to create a Kazakh government, but it lasted less than two years (1918–20) before surrendering to the Bolsheviks.

The Kazakh Autonomous Soviet Socialist Republic was declared in 1920 and elevated to full republic status in 1936. In the period 1929–34, when Stalin was abolishing private agriculture and establishing huge collective farms, Kazakhstan suffered repeated famines which killed at least 1.5 million Kazakhs, as well as destroying 80% of the republic's livestock.

In World War II much Russian industry was evacuated to Kazakhstan; this was followed in 1953–65 by the so-called Virgin Lands campaign, which converted huge tracts of Kazakh grazing land to wheat and other cereal production. This campaign brought thousands more Russians and other non-Kazakhs to Kazakhstan; as a result Kazakhstan became the only Soviet republic in which the eponymous people were not a majority of the population. Because Russians and other Europeans nearly equal the number of Kazakhs in the republic, virtually every public act requires a delicate balancing of differing interests.

On 16 December 1986, Mikhail Gorbachev replaced Kazakhstan's longtime leader Dinmukhamed Kunayev, a Kazakh, with a Russian from outside the republic. This set off three days of rioting, the first public nationalist protest in the Soviet Union. In June 1989, more civil disturbances hastened the appointment of Nursultan Nazarbayev as republic leader. A metallurgist and a Kazakh, Nazarbayev became prominent in the last Soviet years as a spokesman both for greater republic sovereignty and for the formation of a confederation of former Soviet republics. He was elected president by the Kazakhstan parliament in 1990, which was reaffirmed by public vote in an uncontested election in December 1991. Not a party to the dissolution of the Soviet Union announced in early December 1991, Nazarbayev prevailed in arguments that Kazakhstan and other Central Asian states must join the new Commonwealth of Independent States.

Nazarbayev arranged a call by an extra-constitutional quasi-legislative 327-member People's Assembly composed of various cultural and ethnic leaders for an 29 April 1995 referendum on extending his rule until the year 2000. The extension was approved by over 93% of voters.

In October 1998, the Kazakh legislature approved constitutional amendments that enabled Nazarbayev to call for an early presidential race for 10 January 1999. The US State Department in November 1998 criticized a decision of the Kazakh Central Electoral Commission (CEC) and the Supreme Court that major opposition figure Akezhen Kazhegeldin was ineligible to run in the presidential race because of his participation in an "unauthorized" democracy meeting. Three candidates were registered besides Nazarbayev, but only one ran as a true opposition candidate. Onerous registration requirements included a $30,000 deposit (forfeited by the losers) and 170,000 signatures gathered in at least eleven of sixteen regions. Nazarbayev's candidacy was extensively covered by state-owned media. The Kazakh Central Electoral Commission reported that Nazarbayev had won with 79.8% of about seven million votes cast. The Organization for Security and Cooperation in Europe (OSCE) sent only token monitors, and declared on 11 January 1999, that "the electoral process … was far removed" from OSCE standards which Kazakhstan had pledged to follow. At his 20 January inauguration, Nazarbayev pledged to work to create a "democratic society with a market economy," to raise the standard of living, and to uphold existing foreign and ethnic policies.

Nazarbayev has stated that the geographic location of Kazakhstan and its ethnic makeup dictate its "multipolar orientation toward both West and East." He has pursued close ties with Turkey, trade ties with Iran, and better relations with China, which many Kazakhs have traditionally viewed with concern as a security threat. Kazakhstan has extensive trade ties with China's Xinjiang Province, where many ethnic Kazakhs and Uighurs reside.

While seeking to protect Kazakh independence, Nazarbayev has also pursued close relations with Russia and other Commonwealth of Independent States (CIS) members for economic and security reasons. During Nazarbayev's July 1998 visit to Moscow, he and Yeltsin signed a Declaration of Eternal Friendship and Alliance Cooperation in which both sides pledged to assist each other in the case of threats against each other, including by providing military support. In early 1999, Kazakhstan reaffirmed a CIS collective security agreement pledging the parties to provide military assistance in case of aggression against any one of them. In 1995, Kazakhstan joined the customs union formed by Russia and Belarus, which was reaffirmed in an accord on "deeper integration" signed in 1996 (Kyrgyzstan also signed and Tajikistan joined in 1998). Nazarbayev has been highly critical of the feeble union. Another customs union, formed in 1994 between Kazakhstan, Kyrgyzstan, and Uzbekistan (joined by Tajikistan in 1998), was set back by the repercussions of the 1998 Russian and Asian financial crises.

Kazakhstan is the most economically developed of the former Soviet Central Asian republics. Kazakhstan's economic prospects are promising because of its vast energy and mineral resources, low foreign debts, and well-trained work force. There is more Western private investment in Kazakhstan than elsewhere in Central Asia because of Kazakhstan's oil resources and efforts to attract investment. Second to Russia, Kazakhstan has the largest oil and gas reserves of the Caspian Sea regional states, holding promise of large export revenues. Russia's pipelines, the major means for exporting Kazakh oil, were supplemented in 2001 with the opening of a 1,580-km (930-mi) oil pipeline from Kazakhstan to Russia's Black Sea port of Novorossiisk. Kazakhstan has also been involved in an oil swap arrangement with Iran, whereby Kazakhstan sends oil by tanker to northern Iran, and Iran in exchange exports some oil from its Persian Gulf ports. On 18 November 1999, Azerbaijan, Georgia, Turkey, and Kazakhstan signed the "Istanbul Protocol" on constructing a trans-Caucasus oil pipeline from Azerbaijan to Turkey (expected to be completed in 2004 with a capacity of one million barrels per day).

Following the 11 September 2001 terrorist attacks on the United States, Kazakhstan offered the use of its military bases, as well as air space for military and humanitarian purposes during the US-led military campaign in Afghanistan to oust the Taliban regime and al-Qaeda forces. Since 11 September, all radical Islamic groups in the Central Asian nations have been linked with international terrorism. Both the Hizb-ut-Tahrir ("Freedom Party") and the Islamic Movement of Uzbekistan (IMU), two radical Islamic organizations looking to establish an Islamic state in Central Asia, have operations in the country, but the major units of the IMU have been destroyed by the US-led coalition.

This page helped me on my project for college.Thanks!
2
Greta Gallart

Thank you for the info! :D This is for my Model UN country profile