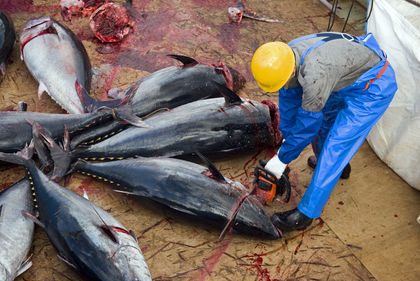 Japan is one of the world's foremost fishing nations, accounting on average for about 8% of the world's catch. In 2000, the total catch was 4,989,354 tons, ranking third in the world. The waters off Japan include cold and warm currents in which fish abound. In 1990, there were 416,000 registered fishing boats which sailed both on nearby waters and in other fishing grounds in the Pacific Ocean, the South China Sea, and the Indian and Atlantic oceans. In 1989, per capita daily consumption of fish and shellfish was about 198 gm, one of the world's highest such averages. Annual per capita fish and shellfish consumption from 1988 to 1990 averaged 72 kg (158.7 lb). In 2000, despite domestic fish production, about $15.5 billion in fish and shellfish was imported in order to satisfy domestic demand.

Whales have been prized in Japan as a source of both food and a variety of byproducts, and Japanese whalers caught 2,769 whales in 1986. Japan ended commercial whaling in 1987, following the imposition of a worldwide ban on the hunting of endangered species of whales by the International Whaling Commission, but announced that it would catch 875 whales for "research" purposes. The 2000 Japanese whale catch of over 16,700 toothed whales of various species represented about 82% of the world's whale catch.

Competition for overseas fishing privileges has at various times brought Japan into conflict with Canada over salmon, with the former USSR over fishing in the Sea of Okhotsk and other Soviet waters (between 1905 and 1945 Japan had special treaty privileges in these waters), with the ROK and China over their limitations on Japanese fishing operations, with Australia over pearl fishing in the Arafura Sea, with Indonesia over fishing in what Indonesia regards as inland waters, and with the United States, especially over fishing in north Pacific and Alaskan waters. Japan has been adversely affected by the adoption of the 200 mi fishing zone by the United States and more than 80 other world nations. Fishing in waters claimed by the United States (where about 70% of the Japanese catch originates) or by many other nations now requires payment of fees and special intergovernmental or private agreements.

Fish culture in freshwater pools, as well as in rice paddies, has long been practiced in Japan. Aquaculture provides an additional1.5 million tons of fish annually. The leading species cultivated are laver ( nori ), yesso scallops, Pacific cupped oysters, and Japanese amberjack. Seaweed culture provides winter season activity for many fishermen. Pearl culture has for more than half a century been the foundation of a valuable export industry.

i loved the information given and would love to see these fishing grounds,please do provide pictures for the article on the page to make it more interesting and a map to show where it is located.excellent work,keep it up,waiting for your reply!
2
Christina

This article was very helpful.It gave me alot of helpful information! I loved it!
-Thank you!
3
hihihihi

this article is the greastest .. i really luv it , it helped me gracefully wit ma project !!!! thanks!!!!
6
Amer El-Husseini

Thanks a lot this article really helped me with my h/w.
7
Logan Marks

This was some great information, thanks for posting it. It helped me a lot on my Assignment for illegal whaling. Thats a lot of whales...
8
yvonne

Good article.It has helped me alot.Accompany the article with some pictures.Thanks!!!
9
paola

Thank this is useful imformation.
I really need it for my japan project
thanks a lot
lol
10
Kai

I live in Japan and think this cite is great. I live in Kobe.
11
maxime

the information on this page is really helpful..good work
13
Rachel

thanks this helped me on a big geography unit and i wish i could go to japan.
15
Alexa Ninichuck

wow great article dude! Keep up the fantastic work your the best man! This completley helped out me and my partner on our project and thanks to this we are now passing our class. My partner did no work and contributed nothing until i found this website. Now she helps constantly.
16
emini

this information helped me alot. i think i will do a project on whaling in japan
18
Morgan

I am doing a project on Japan, and this really helped out.Liked how the facts were simple and didn't involve more information than needed. But is this going to be updated?
19
Miss Hughes

Why is eastern coast become fishing ground of Japan..
21
sandy

HI, can anyone tell me what the connection is between Japanese, consumption of Octopuss and its onward selling, and availability in other countries, outside of The areas near Japan and China. ??

Is this creature as disgusting and almost evil as it looks ???