Land transport facilities suffered wholesale destruction during the 1970-75 war. Cambodia's first railway, a 385-km (239-mi) single track from Phnom Penh to Paoy Pet, was badly damaged in the fighting; moreover, a just-completed 262-km (163-mi) line from Phnom Penh to Kampong Sam was also disabled. The line to Kampong Sam was restored in November 1979, and a Phnom Penh-Battambang railway was reopened in February 1980. Rail service has been periodically disrupted by guerrilla operations. In 2002, rail trackage totaled 603 km (375 mi).

All major cities and towns are connected with Phnom Penh by highway, and from there roads connect to Vietnam, Laos, and Thailand. The US-built 214-km (133-mi) Khmer-America 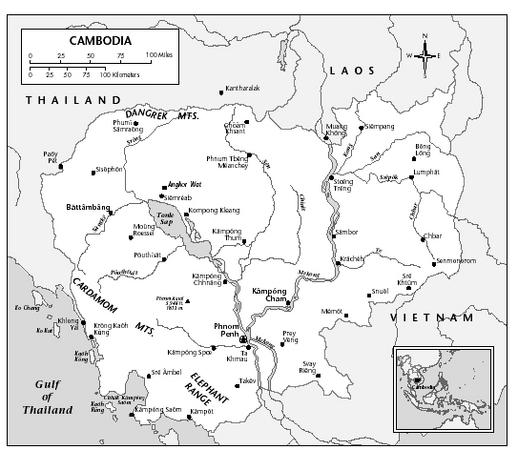 The Mekong is the most important inland waterway. Total length of navigable waterways is 3,700 km (2,300 mi) for craft drawing 0.6 meters, but only 282 km (175 mi) for craft with a draft of 1.8 meters. The river port of Phnom Penh has been upgraded. Until 1975, Saigon was the major transshipment point for outgoing and incoming Cambodian goods; the opening of the deepwater port of Kompong Som made Cambodia largely independent of Vietnam for oceangoing shipping. In 2002, Cambodia's merchant fleet totaled 404 ships (1,000 GRT or over) with a capacity of 1,889,404 GRT. The fleet includes ships of 44 countries under a flag of convenience registry.

Cambodia had 20 airports in 2001, 5 of which had paved runways. The main airport is at Phnom Penh; there are regular flights between Phnom Penh, Hanoi, Vientiane, and Ho Chi Minh City.