The fiscal year begins 1 July and ends 30 June. After World War II, the Commonwealth government assumed greater responsibility for maintaining full employment and a balanced economy, as well as for providing a wide range of social services. Social security and welfare payments are the largest category of government expenditure. The central government has financed almost all its defense and capital works programs from revenue and has made available to the states money raised by public loans for public works programs. Deficits are common. In the latter half of the 1980s, however, five consecutive years of significant surpluses occurred as a result of expenditure restraints. The late 1990s also saw consistent surpluses. In 2000, the government implemented a 10% goods and services tax (GST) on all items, while income tax and corporate tax rates were cut. 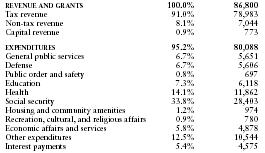