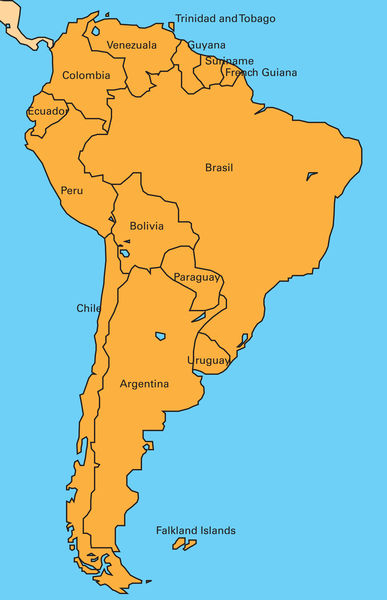 Venezuela claims more than 130,000 sq km (50,000 sq mi) of Guyanese territory west of the Essequibo River, constituting over three-fifths of Guyana. In 1985, UN mediation was requested by both countries. Conflicting maritime claims with Colombia in the Gulf of Venezuela remain unresolved, despite negotiations since 1970. Demarcation of the land boundary between the two nations began in February 1982. In August 1987, a Colombian naval vessel entered the disputed area in an apparent attempt to pressure Venezuela to be more flexible.

Venezuela's capital city, Caracas, is located in the northern part of the country on the Caribbean Sea coast.

Hi this site helped me a lot on a South American Project that I hav 2 du so Thx whoever site this is!
2
akila

this site helped me alot on my Venezuela project, thanks!!!
3
diduno

This site helped alot with my latin america project.
Thank you so so much :)
4
Jennie Paul

This was GREAT for my project! I will tell this site to my upcoming 5th graders!!! :D- Ms. Paul
5
tara

Thx this realy helped my project 8D i will probly get a A in this project. i also thought that this Venezuela forum was easy to understand
7
imani

well it sorta helped me but I needed the size just the size.
8
caitlin

This web site helped me alot on Venezuela. Thanks for the info.
9
This Girl

Oh my goodness, thank you so much whoever wrote this, you may have just saved my whole grade! Thank you!
10
Shot Colla

I do Mining and wow I find exactly what I was searching for in just one page, you guys are excellent ! Keeep Ittt Uppp !
11
Danny

This website was so helpful for my report, thank you and I would of probably gotten an F in my grade if it wasn't for this website, so again, thank you
12
Nur Triki

Thx A lot this site helped me so much in my geography ppt
keep it up!