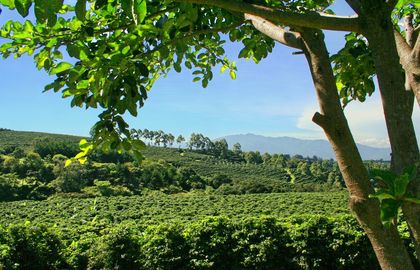 In 2001, agriculture accounted for 5% of the GDP, engaging8.8% of the economically active population. Venezuela continues to rely heavily on food and agricultural imports. Despite abundant resources favorable to agricultural production, 70% of cereals and 98% of oilseeds consumed in Venezuela are imported.

Venezuela does not have the rich soil of many other Latin American countries. In 1998, 3,490,000 hectares (8,624,000 acres), or 4% of the total land area, were used for temporary or permanent crops. The most highly developed agricultural region is the basin of Lake Valencia, west of Caracas and inland from Puerto Cabello. The principal crop of this area is coffee. Before oil came to dominate the economy, coffee accounted for 40–60% of all income from exports.

Under an agrarian reform law of 1960, three kinds of land are subject to expropriation by the government: uncultivated lands; lands worked indirectly through renters, sharecroppers, and other intermediaries; and lands suitable for cultivation that are being devoted to livestock raising. Compensation is paid for expropriated lands. Between 1960 and 1980, 8,467,000 hectares (20,922,295 acres) of land were distributed to 155,200 farming families who had never previously owned property. However, the land reform was adversely affected by mass migration of rural people to the cities.

This was an amazing website. It helped me on my Spanish report! Thanks I am sure I will use it agian. =]
2
rye

i love this website t helped me with my spanish bookmark thing on venezuels..i will most definately use this again alot.thank you for making it possible.hahahah
3
Bob

It's a great learning experience and it helps you understand. I have a report for venezuela and it helped me fnd out about my country.
4
rvn

i have a spainsh project due tomorrow and im a last minute person and this site helped me out alot .
5
Kaylee

THIS WEBSTIRE IS GREAT TI HELPED ME WITH MY SOCIAL STUDIES PROJECT!!
6
Bri

I have to do a report on Venezuela agriculture and OMG this site was the best. Now I dont have to stay up because I am a lst minute person
7
akila

this is a great website for when you have a spanish project on venezuela due the next day thats worth 70% of ur grade. :) Lol
8
lala

This was so helpful for a report on Venezuela!!
9
combuster

It was great for my social studies project and it is impossible to find good information on other sites but this was great.
10
Mary

This site is so cool. I need to find out about Venezuelan agriculture for my Spanish group project and that was perfect information.
11
Alex

this helped me on my Human Geography Project! It was very helpful.
12
Drew

I enjoyed using it on my spanish project,it was very helpful.
13
Angelina

GREAT WEBSITE! HELPED A LOT!! THANKS~~~ I WILL ENSURE YOU THAT WHOEVER READ THIS WILL LEARN A LOT OF THINGS OF VENEZUELA!! ;)
14
Mason Lassiter

This website helped me to do a project at school. Thank You for creating it. There is a lot of information on here about Venezuela and other Spanish-speaking countries.
15
chase

this website helped me a little bit but not very much I mite use it again.
16
michaela ross

i thnk that this helps alot because i am doing a project and it is becoming very helpful throughout the time that i am needing it so thank you for the people who made the website and i hope this is accurate information because i am using it for all its worth!
17
Lynxwood

We have a report on Spanish-speaking countries that our class is working on, and it is worth most of our World Language grade. Thanks to this site, it helped me a lot
18
Izzy

I am doing this Hispanic heritage project last minute (because I am a procrastinator) and it helped me a lot! 4.5 stars out of 5
19
Midnight

This website helped me so much. I was struggling to understand Venezuela issues with agriculture for my MUN project and this put it into perspective.
21
ezrap9

I dont she the venezuela,i imagine it is a very beautigul country i have no maney to go in venezuela