The foreign trade position of the United States deteriorated in the 1980s as the United States became a debtor nation with a trade deficit that ballooned from $24 billion to over $100 billion by the end of the 1980s; by 1998, the trade deficit had reached an estimated $249 billion. In 2001 exports, consisting of automobiles, industrial supplies and raw materials, consumer goods, and agricultural products, were $998 billion, up from $393.6 billion in 1990. General imports for 2001 were valued at $1.36 trillion, a record high. California led the nation in value of exports originating in the state, followed by Texas and New York.

The United States' imports and exports for 2001 (in millions of US dollars) are distributed among the following categories: 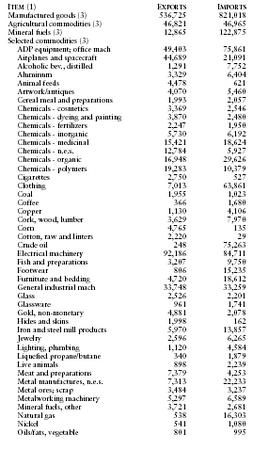 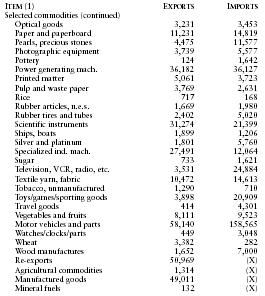 I'll much appreciate it if yu can provide me with that or show me where I can get it on the Internet. Thank you.