Archaeological expeditions have found Arawak implements and utensils on Turks and Caicos Islands. When Juan Ponce de León arrived in 1512, Lucayan Indians had come to inhabit the islands. There is some speculation that Columbus may have made his landfall on Grand Turk or East Caicos on his first voyage of discovery in 1492. The first settlements were by Bermudians, who established solar salt pans in the 1670s. Bahamian, Bermudan, Spanish, French, and British rivalry over the prospering salt trade resulted in numerous invasions and evictions through the first half of the 18th century. In 1787, Loyalists fleeing the American Revolution established settlements and cotton and sisal plantations on several of the larger Caicos Islands. Ten years later, the islands came under the jurisdiction of the Bahamas colonial government. Slavery was abolished in 1834. In 1848, the Turks and Caicos islanders were granted a charter of separation from the Bahamas after they complained of Bahamian taxes on their salt industry.

From 1848 to 1873, the islands were largely self-governing, under the supervision of the governor of Jamaica. Following the decline of the salt industry, the islands became a Jamaican dependency until 1958, when they joined the Federation of the West Indies. When the federation dissolved and Jamaica achieved independence in 1962, Turks and Caicos became a crown colony administered by the British Colonial Office and a local council of elected and appointed members. In 1965, the governor of the Bahamas was also appointed governor of Turks and Caicos, but with the advent of Bahamian independence in 1973, a separate governor was appointed. A new constitution maintaining the status of crown colony and providing for ministerial government was introduced in September 1976. Although independence for Turks and Caicos in 1982 had been agreed upon in principle in 1979, a change in government brought a reversal in policy. The islands are still a crown colony.

The islands were shaken by scandals in the mid-1980s. In March 1985, Chief Minister Norman B. Saunders and two other ministers were arrested in Florida on drug charges and later convicted and sentenced to prison. In July 1986, a commission of inquiry found that Chief Minister Nathaniel Francis and two other ministers had been guilty of "unconstitutional behavior, political discrimination, and administrative malpractice." The governor thereupon ended ministerial government in July 1986 and, with four members of the former Executive Council, formed an Advisory Council to govern until new elections. The islands have returned to their previous form of government, and remain a dependent territory of the UK.

The Turks Islands are low and flat, and surrounded by reefs, sunken coral heads, and boilers. The land mass is limestone, well weathered with pockets of soil; the coastlines are indented with shallow creeks and mangrove swamps. The Caicos Bank is a triangular shoal about 93 km (58 mi) long on its northern side and 90 km (56 mi) long on its eastern and western sides. The highest elevation is only 50 m (163 ft) above sea level on Providenciales. On the north coast of Middle Caicos (which is also known as Grand Caicos) are limestone cave formations.

The ground cover is scrubby and stunted tropical vegetation, with sea oats, mangrove, casuarina, and palmetto. There is little natural wildlife other than birds and butterflies. West Caicos island is especially noted as a sanctuary for birds, and Penniston, Gibb, and Round cays are known for their extensive varieties of butterflies. Spiny lobster, conch, clams, bonefish, snapper, grouper, and turtle are plentiful.

Fresh water is a scarce commodity, and most islanders rely on private cisterns. Underground water is present on North and Middle Caicos, but surface water collected in ponds after rainfall becomes brackish. There have been some complaints of actual or potential ecological damage resulting from the expansion of tourist facilities on Providenciales. The government has identified the absence of environmental education as a potential problem for the preservation of the nation's natural heritage in the future. By 1992, the government had developed legislation that would create 12 national parks, 8 nature reserves, 5 sanctuaries, and 9 historic sites.

It was estimated that 72% of the population lived in urban areas in 2000. The capital, Grand Turk, had a 2000 population estimated at 4,000. Cockburn Harbour is the major town on South Caicos.

About 90% of the population is of black African descent, the remainder being of mixed, European, or North American origin. The official and universal language of the Turks and Caicos Islands is English, interspersed with a number of local colloquialisms. Most islanders are Christian; the main denominations are Baptist (40%), Methodist (16%), Anglican (18%), and Church of God (12%). Other Protestant groups and the Roman Catholic Church are also represented.

There are about 121 km (75 mi) of roads on the islands. The main roads on Grand Turk and South Caicos are paved. Some secondary roads are surfaced with scale from the salinas (salt ponds); otherwise, the roads are merely dirt and sand tracks.

The main seaports are at Grand Turk, Cockburn Harbour on South Caicos, Providenciales, and Salt Cay. An offshore registry program with the UK enables British merchant ships to register with the Turks and Caicos Islands in order to cut crew costs while enabling the vessels to fly the Red Ensign of the UK. There are seven airports and four paved runways of more than 1,220 m (4,000 ft) on Grand Turk, South Caicos, and Providenciales; in addition, there are three small unpaved landing strips among the other inhabited islands.

Tourism and lobster fishing have replaced salt raking as the main economic activity of the islands, which are very poor. Fishing and subsistence farming are the principal occupations; underemployment and unemployment are estimated at over 40%. Important sources of income include tourism and offshore financial services. The closing of the last US military base in 1983 resulted in the loss of rental payments that accounted for 10% of government revenue. Most of the retail trade on the islands consist of imported goods. Tourism has been boosted by the advent of service by American Airlines, and new hotel, resort and casino openings. Visitors are attracted by the beautiful beaches and by opportunities for snorkeling, diving, and sport fishing. The windmills and salinas on Salt Cay and the 19th-century architecture on Grand Turk, along with horse carriages, provide a quaint setting.

Most food for domestic consumption is imported; there is some subsistence farming—mainly corn, cassava, citrus, and beans—on the Caicos Islands. Major sources of government 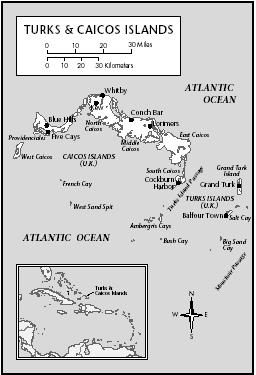 revenue include fees from offshore financial activities and customs receipts as the Islands rely on imports for nearly all consumption and capital goods.

What was the life of the arawaks in the turks and caicos island?