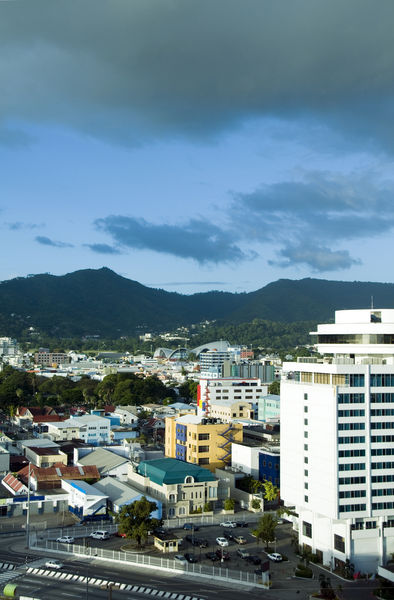 The population is mainly comprised of blacks (the descendants of former slaves), East Indians (originally brought to the island as contract laborers from northern India), whites, and Chinese, many of whom are racially and culturally intermixed. The total population is estimated at 40% black, 40.3% East Indian, 18% mixed, 0.6% white, and 1.2% Chinese and other. Tobago is predominantly black.

While blacks and East Indians on Trinidad are economically interdependent, each community retains its cultural individuality: this is a life that has been called coexistence without assimilation. Intermarriage is rare, and facial and other bodily characteristics still separate the two groups, as do occupation, diet, religion, residence, agricultural landscape, sometimes dress, and often politics. Blacks are dominant in the urban areas, in the oil fields, in the poorer agricultural areas of the north, east, and southeast, and on Tobago. East Indians are dominant in the best agricultural regions. Although outnumbered in Port-of-Spain and San Fernando, urban East Indians are apt to be economically better off than the urban blacks and tend to be highly involved in commerce, industry, and the professions.

This is the first time that someone has spoken the truth. The Indians came as indentured laborers and were paid for their work. When slavery was abolished, they were granted the lands to work and live. The Africans were taken against their will and were brought to Trinidad as slaves and to date they have not been compensated and no apology was given. Today, the Indians are much better off but they still complain and complain that they are being oppressed. They need to remember where they came from and thank God that they are here in Trinidad because they would never have accomplished and gained so much.
2
ANONYMOUS

Hi i am a south african indian living in ths beautifull country, i have heard so much your country please send me some pic
4
Ms. Smith

My Grandfather was West Indian, either from Trinidad or Tobago. He past when I was very young. I grew up learning very little about his heritage. Your article is quite informitive, and not bias. Now I am involved with a company, Organo Gold, that is about to pre-launch business in Trinidad and Tobago. Organo Gold has found a way to make coffee healthy. Please respond to my email
5
okemba coutain

I live in trinidad and i love my beautiful country.
6
Miah

Please update this article. The stats and social knowledge would be wrong to this date. Regards.
7
Leandro Roberts .

Indians in Trinidad and Tobago should shut-up because they came as indentured-labour in 1845 after blacks got their emancipation in 1838. The Africans were in Trinidad and Tobago before the arrival of the East-Indians; blacks came to T&T as slaves until slavery was abolished in 1838 and so East-Indo-Trinidadians whom complain should shut-up. Whilst blacks in Tobago and Trinidad weren't compensated and no apologies were given to the blacks for over 200-years of slavery taken from Africa by force and sent to Tobago, Trinidad, Barbados, Caribbean and North-America, Brazil and South-America and Jamaica as slaves too. Right now blacks in Trinidad and Tobago, Africa, USA and Etc and even here in U.K must stop shooting and killing each other like flies, take advantage of their political and economic-potentials in their midst right-now and uplift themselves because we Africans can make it-period .
8
B.M

Slavery happened all over the world. An unfortunate and tragic human treatment. Slaves were brought by Spanish and French. To dwell on compensation in Trinidad and Tobago is rather unrealistic as the state owes nothing.

The East Indians were brought by British rulers. At that time, India's wealth was being taken from them by the British so those who came to work as indentured labourers were poor and wanted to support their families in India. Many who choose to come were condemned by their families for coming. East India's resilience to all this built a strong spirit.

Truth is like East Indians, Africans have to start afresh and build themselves. East Indians in Trinidad bought their lands from the state by eating little and saving the pennies. Nothing was given freely. Their ambitious nature is responsible for their current financial successes.

Africans had educational opportunities first in Trinidad and Tobago. East Indian education really started in the 1950'S with the help of Canadian Missionaries who built schools to educate East Indians and some were converted to Presbyterians.

Africans also had the opportunity to work in the said sugar and cocoa estates after slavery ended to earn money but they refused. I understand why. They wanted their freedom and no reminders of slavery life but to be blinded by a false sense of entitlement is madness. Earn properties like East Indians did, work and save.

I studies History in high school and university so I know what I am saying. If Africans want compensation they have to go to Spain and France as those countries were responsible for chaining their ancestors from Sub-sahara Africa.

Slavery has ended and Africans are free to choose their life paths. East Indians wealth was stolen from them and those who came had no money just their fighting spirit to improve themselves. A positive thought that one day it will be better. I was taught this as an East Indian.

Today both Africans and East Indians have educational opportunities that they can use to better themselves.

East Indians who talk of oppression stems from selective job opportunities, government housing (primary given to Africans). All of the government housing are mainly accommodated by Africns leaving East Indians to work hard everyday and push their children to better themselves in education to get jobs. Through education East Indians channel themselves where they getting jobs. Some east Indians who are not well educated become self employed, learn skill labour. In most east Indian families there is a constant push to become independent financially and not depend on family or the state.
9
Da

I agree with B.M. Thank you for your valuable contribution
10
Ernest Iwe of Ibo Nigeria

T and T black are predominantly Ibo tribe of Eastern Nigeria in West Africa. This tribe in Nigeria mother land are hard workers love business and successful any where they live . Please l beg you people to work harder to be like us the ibo tribe of Nigeria. Ernest in USA
11
Cutek

What about the real owners who were here before any of these other ethnic groups came? The Caribs and Arawaks. What did they get in return for there land besides being forgotten. In my opinion, the Africans and the Indians keep arguing over who deserves this or the other or who is entitled to this or that but forget that it was originally owned by the Amerindian and other tribes that lived here before Christopher Columbus even discovered I rediscover Trinidad and Tobago. So let's stop with this African and Indian talk because we are a multi cultural diversity. So we should live like it.
12
Paul

B.M that was a brilliant and accurate explanation of the situation. Blacks had all opportunities first. I am black living abroad and I presume you are Indian. Everything you said is accurate- the slave owners in Trinidad was the Spanish first, then the french farmers, who brought their slaves with them when they were fleeing from the French revolution. One or two of the magnificent 7 buildings around the queen spark Savannah in Port of Spain is French architecture. At one time there were multiple languages spoken in Trinidad: Spanish, French and English after the British came. Anyways good input.
13
cj

A sense of entitlement that spirals out of control is detrimental to any group of human beings!
14
Shyam

We Indian living in India love you guys for your coexistence and love for your country. God bless
15
Leandro Roberts

First and foremost Trinidad and Tobago belongs to the Amerindians whom lived there before the African-Coming. Secondly, Africans were forced to T&T as slaves by European-colonial-rulers and slavery was for life too. After slavery was abolished, the East-Indians came as indentured-Labour, then the Chinese came as indentured-Labour too and they got paid except Africans. Africans didn't get compensated, but now Africans now made-up 40.0% of the nation's-total-population should fight-back by honing their both political and economic-strengths by voting sensibly, working hard and saving every-penny to uplift themselves, stop begging, stop mourning, stop robbing, shooting and killing each other like flies and nobodies and then blacks in T&T can make it, even blacks here in U. K, in USA, in Brazil, in Russia and throughout the African-Diaspora too. East-Indians in Trinidad shouldn't be mourning nor complaining of oppression by blacks and the PNM because they came as indentured-Labour and they too should know their history that they arrived on the Fatel Rozack on 30th-May 1845 after African-slavery was abolished on 1st-August-1834 in T&T and the rest of the English-Caribbean. Blacks in T&T should also know their history because history does repeat itself too.
16
Gregg L. Friedman MD

Beautiful Country with some of the nicest beaches in the Caribbean. The people are warm and friendly and the local food is excellent. I love the shark-bake sandwiches. By Gregg L. Friedman MD
17
Gwendolyn

BM I agree to an extent with what you are saying even though you oversimplified the issues African people have. They do need to get up and work towards betterment and they have been. Yes there are certain areas that are in poverty but so are certain Indian area as well. I see many of them begging for "handouts" too or are they just being greedy, since as most of you put it Indians are doing so well.
I am an African who will be one of the first to build generational wealth in my family because I know that's the way forward. It is how Indians achieved their status in this country and it is why they have been able to move ahead of Africans.
Now to address my biggest issue with your comment, that Indians are oppressed because of jobs and housing. First of all if Africans get access to more housing, it's because of the low income aspect, since Africans are the ones at the bottom of the ladder. Since as you say Indians are no given houses, I would like to know how scores of them were receiving homes in the days of Manning, when they were already home owners. Also I have worked in the public service most my life and there seems to be no shortage of Indians in every different ministry and section I work in, in fact Africans are often outnumbered. Again HOW ARE INDIANS OPPRESSED. I will be real and express my feelings, what you and some other Indians are is UNGRATEFUL. You have no love for this country and are only interested in what you can get from it. You are no different than some of the Africans who live in depressed areas and are always complaining that the government does nothing for them. STOP BEING BIASED AND MISREPRESENTING MY COUNTRY TO THE WORLD, YOU ARE NOT OPPRESSED, YOU ARE NOT SUFFERING and if you still lived in India you would be at the bottom of the caste system, regardless of how rich or educated you are. Happy Indian Arrival Day, though it really should be Arrival Day because we all arrived and the Chinese, Syrians etc. should be celebrated too.