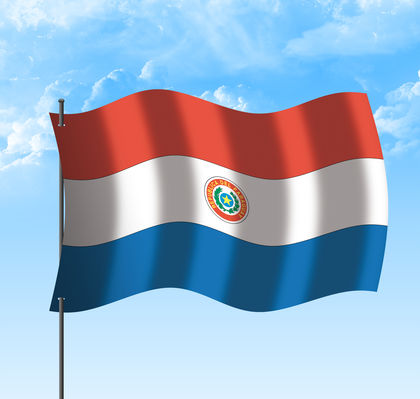 The original inhabitants of present-day Paraguay were Guaraní Amerindians of the Tupi-Guaraní language family. As many as 150,000 Amerindians may have been living in Paraguay at the time of the earliest European contacts. The first European known to have explored Paraguay was the Italian Sebastian Cabot, sailing from 1526 to 1530 in the service of Spain. The first permanent Spanish settlement, Nuestra Señora de la Asunción (Our Lady of the Assumption, present-day Asunción), was founded at the confluence of the Paraguay and Pilcomayo rivers on Assumption Day, 15 August 1537.

Paraguay's next two centuries were dominated by Jesuit missionaries, whose efforts to protect the Amerindians from Portuguese slave traders and Spanish colonists resulted in one of the most remarkable social experiments in the New World. Shortly after the founding of Asunción, missionary efforts began. The priests organized Guaraní families in mission villages ( reducciones ) designed as self-sufficient communes. Amerindians were taught trades, improved methods of cultivation, and the fine arts, as well as religion. Above all, they were protected from exploitation by the Spanish colonists, who sought to exploit them. As the settlements prospered and grew in number to around 30 (with over 100,000 Amerindians), the jealousy of the colonists sparked a campaign to discredit the Jesuits. Eventually, the King of Spain became convinced that the order was trying to set up a private kingdom in the New World, and in 1767, he expelled the Jesuits from the New World. Once they had left, the reducciones disappeared. As for the Spanish colony at Asunción, it dominated the area of the Río de la Plata throughout this period. However, in 1776, when Buenos Aires became the capital of the new viceroyalty of La Plata, Asunción was reduced to an outpost.

In achieving independence, Paraguay first had to fight the forces of Argentina. Buenos Aires called on Paraguay in 1810 to follow its lead in a virtual declaration of independence. Paraguay declared independence from Spain but rejected the leadership of Buenos Aires. An Argentine expedition was decisively defeated, and Paraguay completed its move toward independence by deposing the last of its royal governors in 1811.

Since then, Paraguay has been dominated by dictatorships or near-dictatorships. The first and most famous of the dictators was José Gaspar Rodríguez de Francia (known as "El Supremo"), originally a member of the five-man junta elected in 1811 to govern the newly independent nation. He was granted full dictatorial powers for three years in 1814 and thereafter had the term extended for life. Francia attempted to cut Paraguay off from all contact with the outside world. Commerce was suspended, foreigners were expelled, relations with the papacy were broken off, and an anticlerical campaign was begun. All criticism was stifled, and a widespread spy network was developed. However, at the same time, Francia was honest and tireless in his devotion to his personal concept of the country's welfare. Francia governed until his death in 1840. Today, he is regarded as Paraguay's "founding father."

The next dictator was Carlos Antonio López. López loosened the ties of dictatorship only slightly, but reversed Francia's paranoid isolationism. He reestablished communications with the outside world and normalized relations with the papacy. López encouraged road and railway building, improved education somewhat, and became the largest landowner and the richest man in Paraguay. He made his son Francisco Solano López commander-in-chief of the army, thereby ensuring the younger López's succession to power in 1862, when the elder López died.

During his dictatorship, Francisco Solano López provoked quarrels with Argentina, Brazil, and Uruguay, who allied and attacked Paraguay. The War of the Triple Alliance (1865–70), sometimes called the Paraguayan War, was the bloodiest in Latin American history. López, who fancied himself a Latin Napoleon, drafted virtually every male in Paraguay over the age of 12, with no upper age limit, and insisted that his troops never surrender. The war was a disaster for Paraguay, which lost two-thirds of all its adult males, including López himself. Paraguay's population fell from about 600,000 to about 250,000. The war also cost Paraguay 55,000 square miles of territory, its economic wellbeing, and its pride.

For the next 50 years, Paraguay stagnated economically. The male population was replaced by an influx of immigrants from Italy, Spain, Germany, and Argentina. Politically, there was a succession of leaders, alternating between the Colorado and Liberal parties. Then, a long-smoldering feud with Bolivia broke into open warfare (1932–35) after oil was discovered in the Chaco, a desolate area known as the "green hell." Although outnumbered three to one, the Paraguayans had higher morale, were brilliantly led, and were better adapted to the climate of the region. Moreover, they regarded the conflict as a national undertaking to avenge the defeat of 1870. Paraguayans conquered three-fourths of the disputed territory, most of which they retained following the peace settlement of 1938.

Although President Eusebio Ayala emerged victorious from the Chaco War, he did not last long. The war produced a set of heroes, all of whom had great ambitions. One such man, Col. Rafael Franco, took power in February 1936. In 1939, after two more coups, Gen. José Felix Estigarribía, commander-in-chief during the Chaco War, was elected president. Estigarribía was killed in an airplane crash only a year later, and Gen. Higinio Morínigo, the minister of war, was appointed president by the cabinet. Through World War II, Morínigo received large amounts of aid from the United States, even though he allowed widespread Axis activity in the country. Meanwhile, he dealt harshly with domestic critics.

Morínigo retired in 1948, but was unable to find a successor. After a one-year period of instability, Federico Chávez seized control, and ruled from 1949 until 1954. In May 1954, Gen. Alfredo Stroessner, commander-in-chief of the armed forces, used his cavalry to seize power. He had himself elected president as the candidate of the Colorado Party, and then was reelected in another single-slate election in 1958, although he did permit the Liberal Party to hold its first convention in many years. With US help, he brought financial stability to an economy racked by runaway inflation, but he used terrorist methods in silencing all opposition. Exiles who invaded Paraguay simultaneously from Argentina and Brazil in December 1959 were easily routed. Six other small invasions during 1960 were also repulsed. Stroessner won a third presidential term in February 1963, despite the constitutional stipulation that a president could be reelected only once.In August 1967, a constitutional convention approved a new governing document that not only provided for a bicameral legislature but also established the legal means for Stroessner to run for reelection. Stroessner did so in 1968, 1973, 1978, 1983, and 1988, all with only token opposition permitted. On 17 September 1980, the exiled former dictator of Nicaragua, Anastasio Somoza Debayle, who had been granted asylum by the Stroessner government, was assassinated in Asunción, and Paraguay broke off relations with Nicaragua.

During the 1980s, Stroessner relaxed his hold on Paraguay. The state of siege, which had been renewed every three months since 1959 (with a partial suspension from February 1978 to September 1980), was allowed to lapse in April 1987. Opponents of the regime gave credit for the ending of the state of siege to the United States, which had kept pressure on the Stroessner administration. However, allegations of widespread human rights abuses continued to be made. In April 1987, Domingo Laíno, an opposition leader exiled in December 1982, who had tried unsuccessfully to enter the country on five earlier occasions, was allowed to return to Paraguay. Part of this liberalization may have been in response to mounting criticism from the Roman Catholic Church, whose position moved closer to that of the various dissident groups.

On 3 February 1989 Stroessner's 35-year dictatorship came to an end at the hand of Gen. Andrés Rodríguez, second in command of the Paraguayan military. Immediately after the coup, Rodríguez announced that elections would be held in May. With only three months to prepare, little opposition beyond Domingo Laíno was mounted, and Rodríguez won easily with 75.8% of the vote. There followed an immediate easing of restrictions on free speech and organization. Labor unions were recognized and opposition parties allowed to operate freely. Rodríguez promised and delivered elections in 1993. In those elections, Colorado candidate Juan Carlos Wasmosy was elected to the presidency, the first time a civilian had become president through popular election since 1954. Paraguay had experienced an unprecedented transfer of political power through a constitution from one elected government to another. Wasmosy began to push for economic liberalization, including the sale of state-owned enterprises, but it was unclear whether the military was willing to support such measures.

In April 1996, General Lino Cesar Oviedo staged a brief rebellion when asked by Wasmosy to resign his post as army commander, but a coup was averted and Oviedo was eventually acquitted of charges of armed insurrection. Oviedo, now a civilian, has become the leader of an opposing faction of Wasmosy's Colorado Party. Other than Oviedo's short-lived rebellion, however, no serious threats to Wasmosy's economic and political reforms have been offered. In fact, the more democratic environment was tested and proven in 1993 by the first general labor strike in 35 years. Although the government responded with some force to this first strike, subsequent strikes have been met with a much gentler governmental hand. Unfortunately, the economy itself has been slow to respond to the new reforms. In the 1990s, Paraguay experienced 0% economic growth.

In the 1998 presidential elections, Raúl Cubas of the Colorado Party became president with 55.3% of the vote, but a year later he had to resign after the assassination of vice president Luis Argaña. Cubas was closely associated with General Oviedo and the latter was linked to the political assassination. Upon Cubas' resignation, the president of the Senate, Luis González Macchi was sworn in as president. Cubas sought exile in Brazil and Oviedo sought refugee in Argentina. González was correctly considered as a caretaker until new elections were held in 2003.

On April 27, 2003, Colorado Party candidate Oscar Duarte won the presidential election with 37.1% of the vote. Duarte has promised to fight corruption in his party and the country. He has sought to distance himself from former Colorado Party leaders and has sought to portray himself as a modernizer and democratizing leader that will open Paraguay to the world economy.

The entry on Paraguay was really useful and I learned a lot for my report on Paraguay.I give it 2 thumbs up!
2
shantania french

good and helpful imformation...i will always rely on this information and give friends heads up
3
tobias u.

I found this article very useful. I am writiing a report at age 11. crazy huh?
4
sergio

Very brief and to the point. A gem for anybody wishing to update their information on a trip to Paraguay or the World Cup in Brazil.
7
Gay Boy 101

geyVery brief and to the point. A gem for anybody wishing to update their information on a trip to Paraguay or the World Cup in Brazil