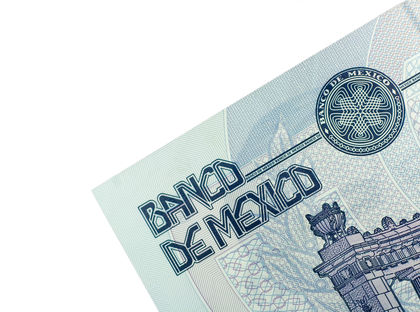 The government encourages local industry by giving financial support, customs protection, and tax exemption to approved or new enterprises. The National Financing Agency has supported new industries by purchasing their stock and then reselling it to the public when the firm is established. The executive branch of government may set ceiling prices on foodstuffs, drugs, and other basic necessities, such as workers' rents. Modern Mexican economic policy derives in principle from the constitution of 1917, which, in Article 27, proclaims national ownership of subsoil rights, provides for expropriation of property needed for national purposes, and provides for the breaking up of large estates and the establishment of village communal landholdings ( ejidos ). The property of foreign oil companies was expropriated in 1938, and production, refining, and distribution were placed under the government-controlled PEMEX. The government also nationalized the railway and banking systems, owns most electric power plants, and partly owns some industrial establishments. Majority Mexican ownership was required in virtually all sectors until early 1984, when restrictions on foreign investment were relaxed somewhat.

Major development projects in the 1970s included an attempt to increase agricultural productivity, modernization of the nation's railroads, expansion of the fishing fleet, and resettlement of some 50,000 families from the northern states to the southern states Campeche, Yucatán, and Quintana Roo.

When the exploitation of huge oil deposits began in the mid-1970s, the Mexican government embarked on an expansionist economic policy, which included an ambitious public-spending program financed to a great degree by foreign borrowing. A 17-point development program announced in 1978 created about three million new jobs by 1981, but it was not fully implemented because of the drop in world oil prices and the subsequent financial crisis. The crisis reached its climax in August 1982, when the government suspended all payments of foreign debt principal and had to resort to emergency credits to avoid default.

New credits from the International Monetary Fund (IMF) were conditional upon Mexico's acceptance of an austerity program that entailed reduction of the budget deficit from 17.9% of the gross domestic product (GDP) in 1982 to 8.5% in 1983. Other austerity measures included tax increases, increases in the prices of controlled commodities, such as bread and salt, and steps to decrease tax evasion and reduce inflation. The de la Madrid administration simultaneously pursued policies to reduce the inflated value of the peso and to generate massive trade surpluses; indicative of their effectiveness were the 1983 and 1984 surpluses, over $13 billion in each year. The government, moreover, pursued rescheduling of its foreign debt, winning agreements in 1983 ($14 billion) and 1986 ($43.7 billion). In 1985 and 1986, however, the earthquake and the fall in world oil prices undermined the recovery; export revenues plunged, and inflation soared. The 1986 rescheduling was conditional upon Mexico's agreement to increase development of the export sector and encourage efficient import-substitution policies, as well as foreign investment.

Since Mexico joined GATT in 1986, trade barriers were eliminated and tariffs reduced. Privatizations since 1989 include: the telephone company, Telmex; Mexico's 18 commercial banks; the airlines, Aeromexico and Mexicana; two large copper mines, Cananea and Mexicana de Cobre; and two large steel companies, Sicartsa and AHMSA. Privatizations have produced large onetime revenues for the government, while simultaneously reducing the government's role in the economy thus garnering savings by reducing its transfers to inefficient enterprises. Furthermore, these new profit-making private sector companies have widened the tax base.

The North American Free Trade Agreement (NAFTA), ratified in 1992 and implemented in 1994, culminated several years of trade liberalization efforts begun in 1986. NAFTA's goal is the creation of a market of 360 million consumers with $6 trillion in annual output. Tariffs on most industrial and agricultural goods are to be eliminated or phased out within 15 years. NAFTA trading benefits are only given to goods produced wholly or principally in NAFTA countries. NAFTA eliminates trade barriers and investment restrictions on participating countries' autos, trucks, buses and auto parts within 10 years. NAFTA proposed to safeguard domestic agricultural production of the dairy, egg, poultry, and sugar sectors. NAFTA opens up foreign investment possibilities in the Mexican energy sector. NAFTA has provisions for the textiles and services sectors, banking, investment, and intellectual property rights. Labor and environmental impacts are also addressed. Mexico established free trade agreements with Venezuela and Colombia as a member of the Group of Three, and with several other Central American nations. Mexico signed a free trade agreement with Chile in 1991.

The 1994–95 Mexican financial crisis demanded the government undertake major policies of economic management and reform. A buoyant financial market and large inflows of capital preceded the crisis. Capital inflow to Mexico between 1990 and 1994 amounted to $104 billion—20% of total capital flows to developing countries during that period. Mexico's external current account deficit widened, there was a rapid growth in bank credit to the private sector, international interest rates were rising, and the country maintained an exchange rate peg. Mexico floated the peso in December 1994; the currency was attacked by speculative investors, which led to a drastic devaluation. The financial system was also very weak, and there was a massive outflow of capital from the country. After the crisis broke, the government realized major structural changes would need to be taken, and international financial support would be needed. The US government, the IMF, World Bank, and the Inter-American Development Bank provided emergency funds, to prevent the crisis from spreading to other countries. The Mexican economy began to recover in 1996.

In 1999, the IMF approved a 17-month, $4,123-million Stand-By Arrangement with Mexico to support the government's economic reform program. In 2000, Mexico repaid all of its obligations to the IMF. The country in the early 2000s was a recipient of large amounts of foreign direct investment, the largest recipient of FDI in Latin America in 2000. The Mexican economy weakened in 2001–02, however, marked by weak domestic demand. In 2002, the government was following an economic program (PRONAFIDE) aimed toward strengthening the country's fiscal position, enhancing competitiveness and stimulating productivity. The government was aiming for a reduction of the fiscal deficit and public debt by 2006. Although the government realized it had to maintain spending constraints, it still increased social expenditures in an effort to combat poverty. The government in 2003 was considering tax reform, opening up the telecommunications sector to more competition, and, most controversial, allowing for private investment in energy.

Mexico has actively participated in the WTO, including the start of the Doha trade round. The government supports a Free Trade Area of the Americas.

Could I have some dates for the opening paragraph?
ie roughly what time the governemtn began giving local industires fiancial support.
Thanks Max