In 2002 there were 15,400 km (9,570 mi) of highways, about 3,126 km (1942 mi) of which were paved. Of the 107,500 registered vehicles, only 23,200 were passenger vehicles. The Pan American Highway virtually bypasses Honduras, entering from El Salvador and running to the eastern Nicaraguan border. The 362-km (225-mi) Inter-Ocean Highway is the only surface connection between the Pacific and the Caribbean that includes in its path both Tegucigalpa and San Pedro Sula. In 1971, a paved highway was opened between Tegucigalpa and San Pedro Sula and west to the Guatemalan border. Tegucigalpa is served by secondary roads to the north and east, while San Pedro Sula is connected both to the important Caribbean ports of Puerto Cortés, Tela, and Trujillo and to the western Mayan shrine site of Copán. Road improvements near the Nicaraguan border were undertaken with US military aid beginning in 1983. 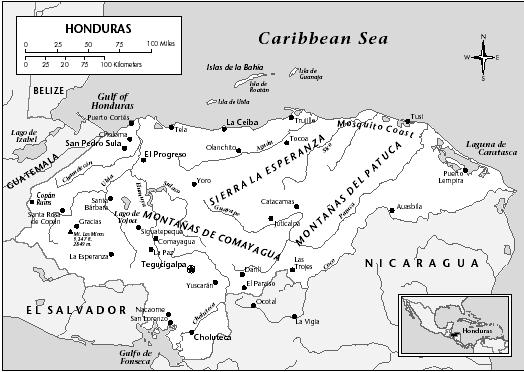 Rail service exists only in the north, connecting the industrial and banana-growing northeastern coastal zone with the principal ports and cities. National Railway of Honduras, owned and operated by the government, maintains all 595 km (370 mi) of track.

Four principal ports—Puerto Cortés, Tela, La Ceiba, and Puerto Castilla—serve the country on the Caribbean side. Another Caribbean port, Roatán, is offshore, in the Bay Islands; and Puerto de Henecán, on the Pacific coast, opened in 1979, replacing Amapala as a port facility, although the latter retains a naval base. La Ceiba and Tela are primarily banana-trade ports; Puerto Castilla (completed in 1980) serves the Olancho forestry project; and Puerto Cortés and Puerto de Henecán handle general traffic. River traffic is negligible. In 2002, the Honduran merchant fleet comprised 284 vessels, totaling 749,243 GRT.

Air service is important in the transportation of passengers and cargo. In 2001 there were 117 airports in Honduras, 12 of which had paved runways. The two principal airports are Ramon Villeda, at San Pedro Sula, and Toncontín, about 6.4 km (4 mi) from Tegucigalpa. Toncontín is served by Transportes Aéros Nacionales de Honduras/Servicio Aéreo de Honduras (TAN/SAHSA), Líneas Aéreas Costarricenses (LACSA), Challenge, and TACA airlines and the domestic carrier Lineas Aéreas Nacionales (LANSA). TAN/SAHSA flies to the US, Mexico, and other Central American countries and also provides domestic passenger service. In 2001, San Pedro Sula International Airport serviced 510,000 passengers on scheduled domestic and international flights.

We now have land at Trujillo Beach.. what is the most direct route to get there by flying??by land?? by ferry?? from the USA, or Canada.. How far off shore is Roatan Island in KM??