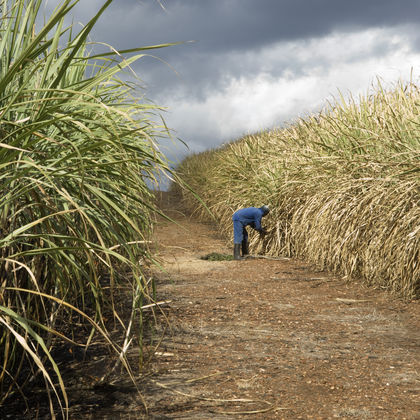 With 66% of the laboring population deriving its living exclusively from the soil, farming is the mainstay of the Haitian economy. Although only about one-third of the country's land is considered suitable for cultivation because of the rugged terrain, over 33% of the land was actually being used for crop and feed production in 1998; permanent pasture land amounted to 18% of the total land area. Nevertheless, population growth outstripped agricultural growth during the 1970s, and a drought in 1985 affected the production of such important staple crops as rice, maize, and beans. Consequently, foodstuffs have had to be imported in increasing quantity.

Production of coffee in 1999 totaled 28,000 tons, as compared with the record-high of 43,600 tons in 1962. Sugarcane is the second major cash crop, but production has been declining; in 1976, Haiti became a net importer of sugar. Sugarcane production in 1999 was 1,000,000 tons. Other agricultural production figures for the 1999 growing season (in thousands of tons) were bananas, 290; corn, 215; rice, 102; sorghum, 96; dry beans, 36; and cocoa beans, 5. Haitian agriculture is characterized by numerous small plots averaging slightly over one hectare (2.5 acres) per family, on which peasants grow most of their food crops and a few other crops for cash sale; few farms exceed 12 hectares (30 acres). Haiti employs an unusual form of farming called arboriculture. Combinations of fruit trees and various roots, particularly the manioc plant, the traditional Haitian bread staple, replace the grain culture of the usual subsistence-economy farming. Crops are cultivated with simple hand tools; the plow or animal power is only rarely employed, except on sugarcane plantations. Coffee is grown on humid mountain slopes, cotton on the semiarid plateaus and sea-level plains, and bananas as well as sugar on the irrigated plains, which covered about 17,000 hectares (42,000 acres) in 1999. Rice has become a basic staple for Haitians, but local production only meets a little more than 20% of demand.

This really helped me on my research paper for the Poverty Of Haiti. I used your site so much when I typed my 5 page research paper. I thank you so much for being here when I needed it! Sumimasen (thank you in my tongue- Japanese)! It has been nice to know about a country very forgotten and I hope to go on a mission trip there to help out in any way I can! So thank you for the information! Sumimasen again!
2
pjay

thank so much it helped me alot on my research. I never knew how bad it was in Haiti till i really read about it!
3
Mary

Thank you for making people aware. I am an agriculturist- missionary in Haiti and it is really tough there. I will be working to teach agricultural methods such as crop rotation and introducing technologies.
Also, you may want to add that it is very rare to see a tractor or animal power. Most farming is done by hand and is hard and toilsome. The mountains are the best place for farming because there is still rich soil and they get more rain there.
4
brooke

thank you so much for supplying such helpful and easy to interpret information, it has helped me immensly on my year 12 health project.
thanks again and keep up the great work!
6
georgia-louise

i think this was a great help with my geography homework. thanks.
7
georgia-louise

i think this was a great help with my geography homework. thanks.
8
Riley- RAB

Thank you so much for this information, im doing a project on Haiti at my school and this has helped a lot with the part for agriculture, THANKS!
9
Gordon

I am now interested in mission work to Haiti. Does anyone know if they are using rotational crops to re-fertilize the soil? I am curious if the Vicia faba, the Broad Bean, Fava Bean, Field Bean, Bell Bean or Tic Bean(all the same) are in use. It is a hardy plant and may be suited to Haiti's climate, also do they use many mules or donkeys? These seem to be ideal creatures for their type of rural cultivation.
10
louis constant

It is sad to hear how miserable agriculture is in Haiti. It also encouraging for someone like me to go back to school to study agronomy,so i can go back home to help my people with new technology in agriculture.
11
kristen lynn

OMG, I am writing a papaer for Agriculture, and this helped out so much, i have seen videos on haiti and i went there last summer and i cry just thinking about it
12
Farrah

I am writing a paper on Agriculture in Haiti. I also would like as much info as possible on the current import bans etc, if any. I would like mike to possibly respond back. I would love to get some insight on your program. I am a senior at The university of Florida. My family has land in haiti and i would love to start a poultry processing plant or a little farm.
13
Hila Gil

I'm volunteering in an agriculture project in Haiti. I'm an agronomist and i'm helping farmers over here. I will be very happy to get any kind of information about agriculture in Haiti.
Thank you!
14
Ewan

If you are an agronomist and wants to help farmers in Haiti, you should go to Hawthorne St. Brooklyn, NY 11203 Firtst Floor
to find out how to develop Agriculture in Haiti. It is an international organization working with the United Nations. It is global, you will find agriculture news, farm machinery, etc.
16
Jewel McLollerz

I did not exactly get the information I needed about what was/is grown in Haiti. It is very sad what this country has been through. Even before the quake, it was still a poor country. Its population is only 10 million. I encourage people to take action; visit Haiti and help out. Join teams such as The Red Cross Team. It is amazing what they do. :)
17
Tom Powers

A government Agricultural Extension Service should help small subsistence farmers use narrow strips of land on the contour along the sides of steep,less than 20%, hill sides. A high, 11%, protein corn, with an average of 3, 1/2 lb. ears per plant, called Bloody Butcher, with 3 climbing Lima beans, 22% protein, vines, called Big Mamma, on each corn stalk, would provide more food per hecter than any other crops. The recipe with about 1/3 beans and 2/3 sweet corn is call sucotash. being about 15% protein. The beans and corn would be harvested about the same time, being about 100 days. Three crops could be harvested off the same ground in one year.
18
Calista

Doing a report on Haiti and I have been before on a mission trip with New Life Church and it is so poor yet so happy. This helped me out a lot. Thanks!
19
Azimjon

Thank you. This site helped me on my project about the Haiti. Because I find important information wich gives me opportunity to do my project succesfully
20
Alexia

This site helped me a lot on my project for Haiti. I got an a+ on it.
21
JONDOE

This helped a bunch with my science homework thanks :)!! Yes. I know. Science. ._. OH WELL only 3 days of school left for me :D
22
Louinel Jean

I am a student at the college of New Jersey and i have started the movement called EACH ONE PLANTS ONE. I know farming is difficult in Haiti and I think the change will come when the people are taught how to manage the environment,. It is more than an issue of farming it has to do with stewardship.
23
Lauren

This site was very useful in my research of food insecurity in Haiti. I especially liked the number of statistics used to back up points and provide a picture of what farming looks like in Haiti. Thank you!
24
john

i couldt find what i was after but i could see it helping other people ;)