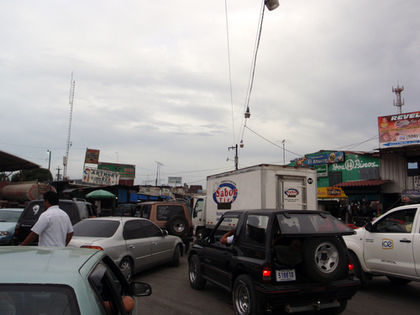 Costa Rica is one of the most industrialized countries in Central America, although industries are predominantly small-scale and primarily involve assembling or finishing imported semifinished components. Of the few larger-scale manufacturing enterprises, the majority are in chemical fertilizers, textiles, coffee and cocoa processing, chemicals, plastics, electronics, and computer chips. The Intel corporation opened a chip-manufacturing plant in 1998. The garment assembly and tuna processing industries are important. Other manufacturing projects include aluminum processing, a petrochemical plant at Moin, a tuna-processing plant at Golfito, and an oil refinery at Puerto Limon with a production capacity of 15,000 barrels per day. Major infrastructure construction projects were planned as of 2002, but with the exception of road repair, most had not progressed. Industry represented 37% of GDP in 2000. The Costa Rican Investment and Development Board (CINDE), is designed to attract high quality foreign investment oriented toward exports.

Thank you so much that was just what I needed to know and it was very easy to read and understand.
2
sdie

Thanks that helped me out on my Costa Rica project as well!
4
soccer

Thanks that helped me out on my Costa rica Project as well!
5
chelsea

Thanks, i got just what i needed! It was really easy to understand.
6
Emily

Thanks, I had a Costa Rica Project and this really helped. It was very easy to read and understand.
7
soccer22

it helped me a lot on my Costa Rica project...thnx =P
8
john

I Have A Costa Rica Project Due Next Week And This Really Helped.Thanks.!
11
crissy

thanks so much! my costa rica prodject is due towmorow! and i didnt start until today! it really helped!
12
Basketball burner

I need primary, secondary, and tertiary industries of Costa Rica!!! I can't find it anywhere!!
13
mandy

thank you sooo much that is what i needed for my project in geography and it helped a lot, THANK YOU! :p
14
Meg

thanks soo much this gave me quick, easy to find and awsome answeres for my spanish project(which i waited to do last minute soo this helps me alot :D!!!)
15
moby

Thanks. I got what i needed because i use the information to track industries so i can talk about them in my chess club to my opponents
16
Jenna Mihajlovski

thanks so much, I HAD A COSTA RICA PROJECT AND IT REALLY HELPED
17
McKenzie

Thanks! I have a Spanish project that I am working on and Costa Rica is my country! This really helped me on it! We have to have so much information. This really helped! I will definitely let friends know about this site. Thanks again!
18
Hello Kitty Lover :)

This unfo really helped! It was easy to understand! I got an A+ on my costa rica industries report! :)
19
Chloe Smith

Thanks for the information. It really helped me. I got a 100 on my project!
20
Halima

Awesome had a Costa Rica report like many of the above really helped. Could use the geographical features.
22
kiley jo

thank you so much with this information given it helped me out alot! (;
23
zakaria

I am doing a Costa Rica project and this really helped me. Thanks!
26
S.W

I'm doing a Costa Rica sheet/project, and that really helped!! Thanks!!
27
Daisy

What percentage of people work in primary industries in Costa rica ?
28
anya

thx I had a Costa Rica project and this really helped a lot.