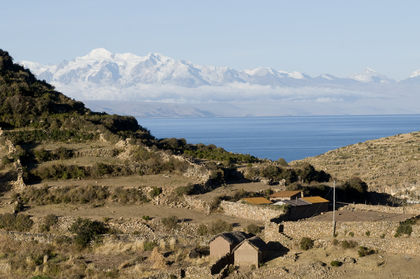 An estimated 2% of Bolivia's land area is devoted to arable farming and permanent crops. Agricultural development has been impeded by extremely low productivity, poor distribution of the population in relation to productive land, and a lack of transportation facilities. Prior to 1953, about 93% of all privately owned land was controlled by only 6.3% of the landowners. The agrarian reform decree of August 1953 was aimed at giving ownership of land to those working it and abolishing the large landholdings (latifundios). By 1980, 30.15 million hectares (74.5 million acres) had been distributed to 591,310 families. By 1996, 60% of Bolivian agriculture was channeled to markets, and 40% was subsistence farming.

Except around Lake Titicaca, about two-thirds of the cultivated land on the Altiplano lies fallow each year. Dry agriculture is the rule, and the most important crops are potatoes, corn, barley, quinoa (a milletlike grain), habas (broad beans), wheat, alfalfa, and oca (a tuber). The potato is the main staple; dehydrated and frozen to form chuño or tunta, it keeps indefinitely. The Yungas and Valles contain about 40% of the cultivated land. The eastern slopes, however, are too steep to permit the use of machinery, and erosion is a serious problem despite the practice of terracing. The most lucrative crop in the Yungas is coca, which is chewed by the local population and from which cocaine is extracted. The net production of coca leaf was estimated at 20,200 tons in 2001, down from 89,800 tons in 1994. Coca leaf production represents about 20% of world production. Coffee, cacao, bananas, yucca, and aji (a widely used chili pepper) are also important. In the fertile irrigated valleys, the important crops are corn, wheat, barley, vegetables, alfalfa, and oats. The Tarija area is famous for grapes, olives, and fruit. The region east of Santa Cruz de la Sierra, where most of the nation's unused fertile lands lie, is considered the "promised land" of Bolivian agriculture. Lowland rice production is increasing rapidly and already satisfies domestic need. The sugar grown there is used mostly for alcohol, but in the 1960s, the mills increased their refining capacity, thus meeting internal consumption requirements. In the tropical forests of the northeast, the Indians practice slash-and-burn agriculture.

very helpful for my country report.THANK YOU VERY MUCH!
2
cj

Who was the author of this report? It was very helpful and I am hoping to be able to use it in a report.
3
Toni

Are foods grown in Bolivia safe to eat. I know that China has a lot of unsanitary conditions. Just checking other countries. Just purchase a product from Costco called "Seeds of Change" the quinoa is grown in Bolivia.
4
Jovi