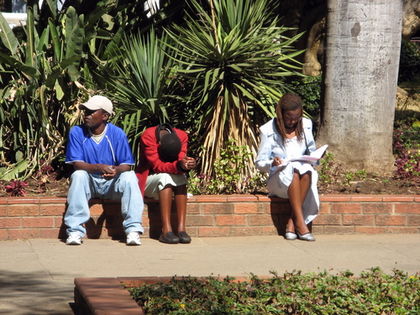 All health services are the responsibility of the Ministry of Health, which covers 50% of total health care expenditures provided by local authorities (with Ministry of Health grants), mission churches (also with grants), and industrial organizations and private services. The government has declared its intention to provide free medical services for all. Prior to independence, facilities for Africans were free, but these were greatly inferior to those available to Europeans. Zimbabwe has been focusing on building and/or upgrading rural health care centers and district hospitals and expanding rural health programs, such as immunization, control of diarrheal diseases, training of health care workers, and improving the supply and affordability of essential drugs. The local pharmaceutical industry is well developed. The Ministry of National Supplies operates the Government Medical Stores, which procures goods on behalf of the Ministry of Health. There were four tiers of health care delivery in Zimbabwe as of 1992: 56 rural hospitals and 927 health centers (public and private) providing preventive and curative services; 55 district hospitals; 8 provincial and 4 general hospitals; and 5 central hospitals located in major cities. As of 1999, there were an estimated 0.1 physicians and 0.5 hospital beds per 1,000 people. About 85% of the population had access to health care services in 1992. In 2000, 85% of the population had access to safe drinking water and 68% had adequate sanitation.

The AIDS epidemic is among the worst in the world. At the end of 2001, the number of people living with HIV/AIDS was estimated at 2.3 million (including 33.7% of the adult population) and deaths from AIDS that year were estimated at 200,000. HIV prevalence in 1999 was 25 per 100 adults. Demographic surveys project that AIDS may increase child mortality rates nearly threefold by the year 2010 in Zimbabwe.

I had to do a project of World Inequalities and i chose health in Zimbabwe, i ensure you that i did not plagiarise. But thankyou for little bits of information, i would not of passed if it wasn't for you :) :) :D
2
Sarah

I wrote a paper about whether or not Zimbabwe's governement system effected the life expectancy of the country, this definitely helped me. Thanks XD
3
adrian albertyn

Please advise me the email address of the Minister of Health in Zimbabwe.Thanks.
4
shaun

thanks very much for this useful peice of info it really helped me with my coursework and improved my marks. c:
5
Lesley Arnold

I have to find out about the Health Care in Zimbabwe and compare it to the NHS in the UK. Can you please send me various links or contacts where I am best to find this information

This is really helpful. I'm doing an assignment on Zimbabwe's healthcare system and was just wondering if you knew the exact structure ? Would be a major help !

Hi
Thanks for this valuable information. Do you have current data that will help me identify key issues within Zimbabwe healthcare system and possible future development. I am doing some work on Health in contemporary society--Global issues ,human rughts and citizenship. Thanks ever so much
8
Muzivi Kudakwashe

This was useful to me. I am trying to assess the extend to which the GVNT of Zimbabwe has tried to make health care accessible to every citizen. Could you send me more information concerning the above topic. Thank you.