Among the most serious of Zimbabwe's environmental problems is erosion of its agricultural lands and deforestation. By 1992, deforestation was progressing at the rate of 70,000–100,000 ha per year, or about 1.5% of the nation's forestland. The confinement of large segments of the population to relatively unproductive lands before independence put severe pressure on these lands, a substantial portion of which may have been irreversibly damaged. 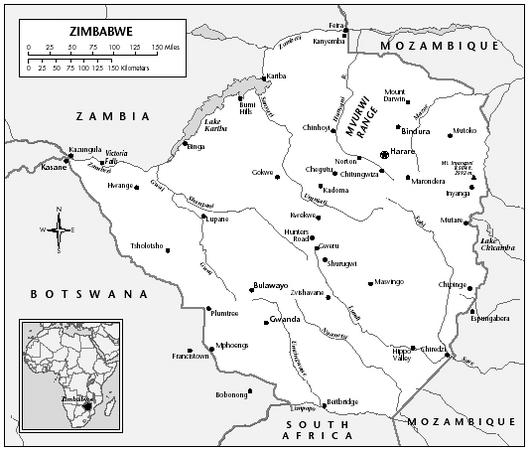 Zimbabwe's air is polluted by vehicle and industrial emissions, while water pollution results from mining and the use of fertilizers. Zimbabwe's cities produce 0.5 million tons of solid waste per year. The nation has been estimated to have the highest DDT concentrations in the world in its agricultural produce.

In 2001, nine of the nation's mammal species and nine bird species were endangered, as well as 73 types of plants. Zimbabwe has about half of the world's population of black rhinoceroses, an endangered species. Rare or threatened species include the cape vulture, black-cheeked lovebird, and brown hyena. For protection, the government has adopted a policy of shooting poachers on sight.

i would like to know how people in zimbabwe adapt to live in this harsh environment.
3
dee

what are the main environmental problems in Zimbabwe giving specific examples?
5
Daniel

The environmental policy of Zimbabwe has been formulated by the authorities but nothing have been done to educate people about the policy.In Mabvuku/Tafara, there is Lafarge company which emit unknown dust and gases to the residents and nothing have been done to educate the residents what the policy say about gases.Both the pressure groups and the government has done nothing about this. It is good if environmental education can be brought to the people.
6
jean

What are the different features of their bodies that help them in coping with the difficult environments or do they not cope at all?
7
Patience

The major environmental issue in our rural settlements is land degradation in its various forms such as stream bank cultivation, veld fires, deforestation, illegal mining activities. We also have the issue of poaching, that is, fish and wild life poaching. I think the relevant ministry and local authorities should gazette and enforce by-laws and also produce environmental action plans if our land is to remain sustainable for the future generation. Traditional leaders should also be empowered with knowledge so that they become a force that ensures the management of natural resources in our rural communities.
8
illi

I think instead of enforcing the law on people in rural areas they should integrate the rural population in environmental conservation and also environmental education is important. the government and relevant authorities should also consider traditional ways of environmental preservation used by the local people in those respective areas and empower them.