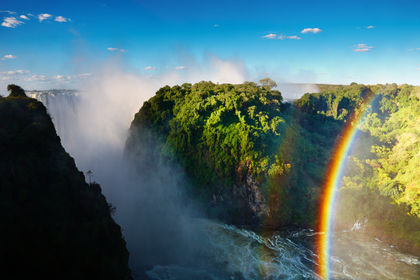 Altitude and relief greatly affect both temperature and rainfall in Zimbabwe. The higher areas in the east and the highveld receive more rainfall and are cooler than the lower areas. Temperatures on the highveld vary from 12–13° C (54–55° F ) in winter to 24° C (75° F ) in summer. On the lowveld the temperatures are usually 6° C (11° F ) higher, and summer temperatures in the Zambezi and Limpopo valleys average between 32° and 38° C (90–100° F ). Rainfall decreases from east to west. The eastern mountains receive more than 100 cm (40 in) annually, while Harare has 81 cm (32 in) and Bulawayo 61 cm (24 in). The south and southwest receive little rainfall. Seasonal shortages of water are common.

The summer rainy season lasts from November to March. It is followed by a transitional season, during which both rainfall and temperatures decrease. The cool, dry season follows, lasting from mid-May to mid-August. Finally, there is the warm, dry season, which lasts until the onset of the rains.

You have helped me through all of my tough assignments (most of them anyway)!
2
bob

i liked this artical it helped with my project thanks!
3
bob's brother

i liked this artical it helped with my project thanks!
4
A.R

this article is great! it saved my butt and my grade in social studies! thanx!
6
a.d

this was helpful in my geography assignment thanks
7
Nathanielstorey

WELL TO TELL YOU THE TRUTH THIS WEBSITER HAVE HELPED ME ALOT ON MY PROJECT IN ZIMBABWE. AND IT GAVE US LOT OF PICTURES AND INFORMATION.SO IF YOU NEED INFO THIS IS YOU PLACE.
10
m&m

Thanks this really helped me on a part of my history project!! :)
11
Student

THIS IS THE BEST WEB SITE IN THE WORLD IF YOU NEED HELP WTH FINDING OUT THE TEMP. IN ZIMBABWE
12
bunny

thanks for the info it heped a lot with school!! :)
13
kurtz

Thank you SO much! This helped a lot with my geography project! Good job on the website!
15
thobile myeza

wow this wesite is awsome... i neva thought i would do my school assignment on m own.. with the help of this web.. i got high marks.. thanks guyz...
16
ezkay

im doing a research paper last minute and this is the most helpful website i have found yet! thanx a lot!
17
Azure Cook

This was a great site. Vary thorough! It really helped me for my report on the interesting Zimbabwe.
18
bob's brother's sister

i liked this artical it helped with my project thanks!
19
Veronica

this saved me in social studies, and it saved my Africa report. thanks!
20
katy

I Love this.I got a A on my project and it was AWESOME!This website could totally help my brother.THANK YOU VERY MUCH!
21
capper

Thanks dudes, this article helped out a ton with my project! :D
24
Caty K.

I'm doing a project on hunger and my country of course, was Zimbabwe. This site is very helpful for getting facts about the country like, climate. Thank you for creating this helpful site.
25
Leeroy

This article really helped me through my research and lm glad. Keep up the good work and God bless
26
lama lover

Great Info that really helped me on my project. And GO PATRIOTS!
28
Raphael

Thanks very much! Helped with my assignment .I will be pleased to check in again
29
N.chiwenga

This helped me a lot and I just want to say thank you very much! This project was really hard but now it's easier.
31
Tyson

Thanks for the info I really needed it for my work